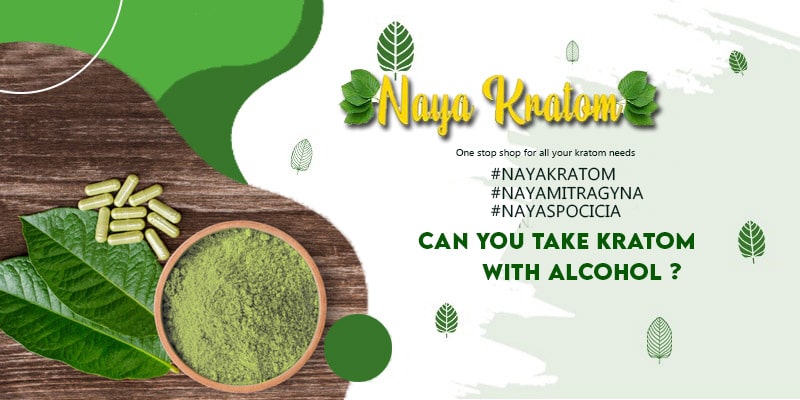 Are you a person who consumes alcohol every day? Are you aware of Kratom’s endless benefits and want to know if you can take Alcohol and Kratom at the same time? The answer is not as simple as it seems as Kratom is not researched and studied that much to provide the simple yes or no answer.

The coming discussion will make it easier for you to make an informed decision about how to use Kratom.

Can You Mix Kratom And Alcohol?

Kratom is a stimulant and sedative, while Alcohol is a depressant. Anyone having a general knowledge knows that mixing any kind of drug, herbal or not, with alcohol is often not a good idea.

Mixing a Stimulant and Depressant can be dangerous as they have the opposite effects and can cause adverse effects.

Alcohol is a depressant that means that it blocks the nerve impulses from the central nervous system, in general, depressing the whole Nervous system of the body. This mechanism makes the consumer unaware and numb, unable to comprehend the surroundings and the changes in the body. Any overdose or abuse can be left unattended as the person’s general system is depressed.

Kratom is a relatively new herb; its origin is from the Southeast Asia Rain forests but has become very popular among the U.S. in recent years due to it’s growing usage and miraculous effects. However, Kratom is misunderstood and significantly less studied and researched.

Kratom is a psychoactive substance that acts on the brain and its receptors. It is a stimulant and sedative depending on the Strain used. It makes the mind relaxed and calms the nerves that give a sense of positivity and calmness. It helps in sedation and makes one sleepy.

Mixing alcohol with drugs should be avoided at all costs unless recommended by someone authentic.

Kratom is a less understood substance, and some people use kratom with alcohol without any side effects, but it always better to be careful. The FDA has reported causes of abuse and overdose that have led to the death of consumers that may have used Kratom with another drug or substance.

What Happens When You Combine Kratom With Alcohol?

Had a hectic day? Headed out with some friends, had a couple of drinks, and lost count? This situation is quite normal for people in routine, but when using Kratom, you need to be careful. Both Alcohol and Kratom have adverse effects that can worsen when taken in more massive amounts and imagine combining both.

Effects When Taken In Correct Dosage

As discussed above, kratom and Alcohol have a combined effect when mixed, kratom being the stimulant and alcohol the depressant giving a combined sedative and numbing effect when taken in the right quantity.

Effects When Taken In Larger Quantities

Kratom is a less researched herb, and Alcohol is a notorious one due to its addiction liability and chronic long term side-effects when abused. Kratom and Alcohol combination is significantly less studied, and hence nothing can be said with certainty. To know the combined adverse effects, we need to see the personal side effects of an overdose of each.

Alcohol, as we all know, has many chronic and acute side effects when not taken carefully or abused. Some of the expected impacts are:

Quite a life-threatening list. It is always preferable to consume alcohol in small quantities and avoid abuse.

Although less studied and observed, the knowledge gathered from real-life users and medical practitioners shows that Kratom is not harmless. It is herbal for sure, but again, an excess of everything is harmful to everyone.

Some of the commonly seen effects of Kratom abuse are:

Kratom is a mild herbal substance that doesn’t produce side effects unless you misuse it or take it in massive doses.

Please avoid using Kratom with other drugs that are high risk or are psychoactive that also involves Alcohol.

Now that we have observed the individual harmful effects of each abuse, we can predict and discuss the combined hazards that this combination can cause.

Let’s take a look at some of the effects that consumers experienced:

These are some of the commonly observed side effects reported in the daily emergency units and explained by the consumers.

However, the effects differ according to the dosage and amount of each Alcohol and Kratom consumed.

Small quantities are usually beneficial for most people and almost safe all the time; however, the greater the amount, the greater is the risk you are taking.

Some dosage related side effects as learned and reported by the little research available on Kratom, and it’s combinations are:

Alcohol and Kratom work together to stimulate and depress the central system at the same time. The picture may look scary, but that’s not right for small quantities.

Mixing and taking Kratom and Alcohol in Low does give you a much stronger relaxing experience. Alcohol enhances the effects of Kratom in a gentle way that makes consumers feel the positive impact much more deeply.

There is no reported adverse effect of this combination in a low dose. However, if you have to work or operate any heavy machinery or have to drive, we recommended not to take this combination

A moderate dosage of both can have adverse, undesirable effects. Alcohol and Kratom are very opposite, and in larger quantities, they fail to act in synergy. Opposing effects can cause:

Most people who experienced these effects combined Alcohol with Red strain Kratom as it is the most potent one. Different themes have different results, so it is hard to specify the outcome as some people didn’t experience any adverse effect, even when taking a moderate dosage of this combination.

The high dosage has only adverse effects as both substances are potent and larger quantity makes them more psychoactive and robust, leading to disastrous side effects.

The motor system of the person is disorganized, and they feel difficulty in perception and confusion, headache takes over.

This headache and confusion are called Kratom-Alcohol Hangover.

Profound sedation, seizures, and Hypertension are also commonly seen. The worst-case scenario may be leading to coma and, eventually, death.

Overdose has high chances when Alcohol and Kratom come together. Overdose is the scary end of abuse. It has life-threatening consequences. Some of them are:

All of these because of the depressant nature of Alcohol that is enhanced by Kratom.

Try to take Alcohol and Kratom separately and, if not possible, take them in a low dosage

What Is The Safe Dose For Kratom Alcohol Combination?

Kratom and Alcohol is a significantly less researched combination, so taking into account the safe dosage of Kratom can help us find the best and safe dose for Kratom Alcohol mixing.

A safe Dosage for Kratom is 5 Grams. Any dose above 8 grams is considered high, and above 15 grams is labeled as abuse.

Alcohol is a depressant, so taking Kratom with it makes abuse more inevitable. Take 5 grams or less amount of Kratom with Alcohol to avoid any undesirable effects.

Alcohol And Kratom? Why Is It So Complicated?

Kratom, in general, is quite complicated and misunderstood. The FDA and DEA are trying to make it a controlled drug like marijuana and heroin. With a lot of ongoing misinformation and false news about kratom, it is almost impossible for researchers to experiment on it. Lack of research and authentic information has made it very complicated for Kratom enthusiasts to label any combination safe.

The same goes for Kratom and Alcohol; However, people are using it all over the world. There is evidence of it being safe; it is still too early to say anything with certainty. There have been reported cases where people died when they consumed Kratom with any other drug or stimulant substance.

American Kratom Association is working against these cases and claims that these are not true but part of a big game to defame Kratom and its industry. However, unless there is authentic research, it’s not safe to say that Kratom Alcohol combination is okay for use.

Kratom helps many addicts with their withdrawal symptoms. It allows people to control their cravings and severe withdrawal effects.

Kratom is a herbal solution to dependence, but using it with Alcohol can lead to dangerous psychotic effects.

Various Kratom review forums and Reddit has many reviews by consumers who are using or used Kratom with Alcohol.

Some people have experienced some side effects. Some had severe reactions while others use it without any problem.

Some people suggest that it is safe as long as you use it at a low dose and avoid consuming regularly.

Most users suggest taking low doses and cutting down Alcohol intake to the lowest. Various threads and posts on Reddit show that people use it without any side effect, but the key is the lesser, the better.

Some consumers who experienced adverse effects blame Alcohol, and others find Kratom the culprit, Yet there is no authentic research to back up any of these claims and accusations.

Are you hooked to Kratom and Alcohol? Do you want to quit it? Is it hurting you, but you are unable to stop? Don’t worry; there is a solution to every problem.

Addiction therapy, family support, Behavioral therapy are some of the most convenient and safe ways to get rid of these addictions before it’s too late. Treatment prevents long term medical and nonmedical consequences.

With significantly less information and research on Kratom available, we have gathered all the possible study and user experiences to conclude that Kratom and Alcohol is a dangerous combination. Taking it in low doses may benefit many people, but the high dosage is always harmful. Take in a short amount and avoid taking this combination as much as you can.