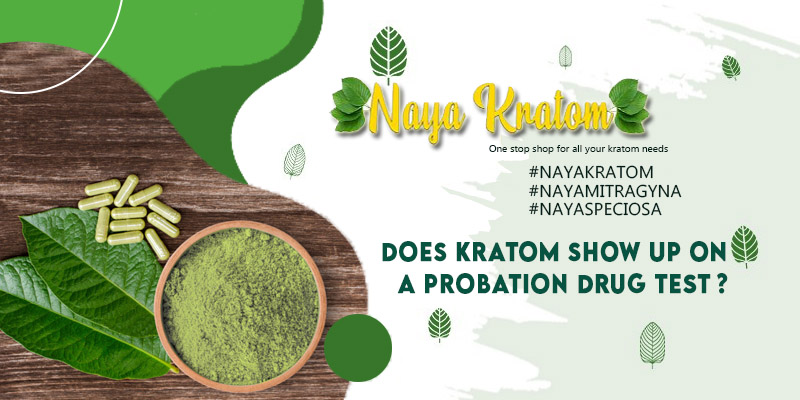 One of the reasons people choose Kratom is to minimize the risk of getting addicted and because many believe that they can skip positives on the drug tests. But a big question mark still persists at the end of the question: does Kratom show up on a probation drug test?

We wish the answer could be given in yes or no only. However, the reality is that it depends upon the type of test. So, if you are to get a drug test, then whether or not Kratom shows on the drug test entirely depends upon your luck. By luck, we mean what type of test is being used for you. Many basic tests do not test the kratom alkaloids. But some urine or blood tests may easily detect these miraculous alkaloids. So, which test your parole officer is using to test you will determine your fate!

Some standard drug tests like SAMHSA-5 cannot detect Kratom, but other urine and blood tests can very well detect some of the alkaloids. Since blood sampling is not as easy as getting a urine sample, urine samples are usually collected to perform drug tests. However, you cannot predict this for sure. Moreover, there is a drug test called the 10-panel-drug test, which conveniently detects only some of the kratom alkaloids in the body. Since Mitragyna is not illegal, many authorities are not concerned about its consumption as much as other illicit drugs.

Kratom in a urine test

Some people are confused about whether Kratom shows up in the urine or not. So, the simple answer is yes. Kratom and its derivatives can be found in the urine with the right drug test. However, it is still unclear how long Kratom and its metabolites can be detected in the urine. Some researches have shown that it can be detected up to 1 week after consumption.  Urine can most likely not determine the concentration accurately.

Blood tests, unlike the urine test, can detect not only the presence of Mitragyna but also how much one has consumed. In other words, it can detect the concentration of this magical herb.

Kratom in saliva and hair

Since hair follicles are used to detect substance abuse, we assume that it might be the case with Kratom too. However, there are no such reports of hair follicles being used to detect Kratom. Similar is the case with saliva. Saliva testing is commonly used for illegal substance abuse; however, Kratom is legal in most of the US; therefore, there are no such reports of saliva being used for it.

Many times the probation drug test will detect the same recreational substances as the standard drug test. Standard tests done regularly, like at the workplace, may not be as detailed as the tests done by a parole officer. So, do not confuse a regular screening with a probation drug test. A regular standard drug test aims to detect illegal or mind-altering illicit substances, while a test by your parole officer may be designed to detect more recreational drugs. However, that isn’t always the case.

The extended panel or substance test is an add-on test which can be added to the 5 or 10-panel drug test, and it particularly detects substances and their metabolites.

Kratom is the least important substance on the list of drug tests, so there are high chances you never get tested for it. It is considered a herbal medicine; therefore, it does not attract much attention from the parole officers. Moreover, Mitragyna is not a controlled substance, so until and unless the officer is highly concerned about you overdosing or abusing, you won’t be in trouble. So, the key to be on the safer side is to avoid consumption or minimize the use to a bare minimum to avoid any troubles during your probation.

How long does Kratom stay in the body?

How long any drug remains in the body depends upon the metabolism, which depends on the age of the user, the health condition of the consumer, the strain of Kratom, and the diet of the person. However, if we talk in general, the average half-life of Kratom is approximately 24 hours, i.e., 1 day. Having said that, Mitragyna speciosa can last as long as 40 hours too. Complete elimination takes around 6 to 9 days. This, in other words, means that if you have the slightest doubt of fear of being caught on the drug test, abstain from its use at least for a week or week and a half for utter peace of mind. Doing so will remove the risk of traces showing up in urine or blood samples.

Is consumption of Kratom a criminal offence?

Kratom has been legalized in many countries around the world. The majority of the American states have also allowed the use of Mitragyna. However, there are still some U.S. states and some countries where the use of Kratom is prohibited or illegal, therefore, it is highly imperative for you to confirm the local laws before you start consuming Mitragyna.

In one sentence, we would say: It is a grey area. Although usually parole officers do not screen for kratom in the drug test, this cannot be for sure. So, if you don’t want to take any chances, abstain from it during your probationary period. However, if you decide to consume, make sure you are well aware of the local laws regarding the legality of Mitragyna.