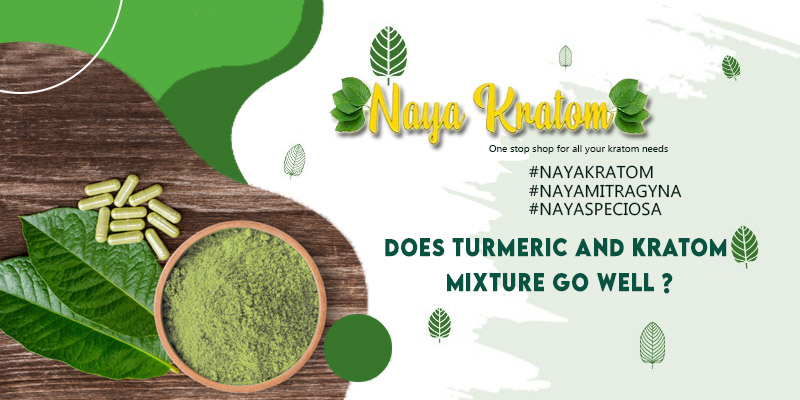 The surprising thing about kratom, apart from its amazing healing ability and therapeutic nature, is its capability to link with many natural plants and herbs. The plant either exhibits potentiated effects or shows unexpected mind soothing results when mixed with different additives.

There are a ton of inter-plant pairings to try, but the one that stands out the most is the Turmeric and Kratom combination. Both herbs complement each other in a way that depicts fascinating results that everyone can experience.

To understand why this particular combination has such a massive hype, we’ll have to study the true nature of turmeric.

Turmeric is a spice procured from an edible plant Curcuma Longa plant indigenous to he Southeast Asia, East Africa, and some parts of the Middle East. A relative to the ginger family, turmeric spice is considered amongst the most elementary spices added in Asian and Middle Eastern cuisines.

It is a common food flavoring and coloring agent that adds a tint of bitterness and gives the curry some of its flavor and color. Turmeric is sold and used in a powdered form obtained by grinding Curcuma leaves. However, the uses of turmeric extend beyond culinary practice.

Just like Kratom, this herb has a long history of medicinal use in the Siddha, Chinese, Ayurvedic branches of medicine. Turmeric’s almost identical health benefits have led people to combine it with Speciosa for an enhanced healing experience.

Medical studies have disclosed the true nature of turmeric and have justified its traditional medicinal applications. The herb’s health benefits are derived from its rich portfolio of chemical compounds.

The turmeric oil obtained from Curcuma roots is another beneficial extract of the plant. The herbal oil carries antifungal and anti-allergic properties making it an essential component for skincare products.

The Health benefits of taking regular turmeric are too prominent to ignore. The wide range of healing properties of turmeric is solely reliant on the herb’s chemical composition. The presence of vitamins, natural fibers, minerals, and phytochemicals allow it to act as a healthy supplement.

Many healthcare professionals and physicians attest to these advantages by prescribing turmeric as a natural treatment for chronic illnesses. When taken with a potent therapeutic herb like kratom, its effects can multiply tenfold.

Despite having enough room for medical research to be done, most studies have deemed turmeric as a healthful supplement.

Turmeric as an Antidepressant

Turmeric tends as an antidepressant thanks to the all-around capacity of curcumin. Recent medical studies have bridged up a link between curcumin’s ability to treat chronic inflammation and depression.

Although their relationship is not yet medically proven still some research indicates that inflammation and depression influence or intensify one another. This phenomenon suggests that drugs or substances that treat chronic inflammation can also be a remedy for curing depression.

Research conducted in 2017 found that turmeric may be a harmless and effective organic substance that can treat depression. Some even believe that mixing turmeric with Mitragyna can not only alleviate depression but can also cure major depressive disorder (MDD).

However, the combination of substances with turmeric still requires extended researches. There is no medical claim that determines the amount of both the substances in treating MDD.

Turmeric as an Antioxidant

Curcuminoids, the biochemical constituting most of turmeric chemical composition, carry antioxidants in higher concentrations. Antioxidants are popular for relieving oxidative stress – a precursor to various mental and physical health disorders.

Taking turmeric alongside Korth – a plant renowned for its therapeutic nature can help reduce stress levels to the minimum. This powerful combo can turn out as an excellent mood booster.

Turmeric can keep you from spending on synthetically prepared anti-inflammatory drugs and lotions for treating swelling. The natural herb is filled with anti-inflammatory characteristics without any side effects. Instead of simply removing swelling, the plant can also help improve the body’s ability to defend against microbes.

The credit for its medical efficacy against inflammation goes to curcumin. Curcumin strongly defends against malicious radicals that create chronic inflammation. A study accounts for the fact that turmeric extract can potentially be used as an active anti-inflammatory compound.

Curcumin’s ability to prevent inflammation can be closely related to alkaloids present in the plant. Just like curcumin, these alkaloids have been known to be effective against swelling.

Other than being used as a spice or coloring agent, turmeric possesses a high nutritional value. The herb contains vitamin C, vitamin B6, manganese, potassium, carbohydrates, iron, and proteins in varying amounts.

One tablespoon of the natural substance bears 29 calories. Being a low-calorie spice, turmeric can easily become a part of your diet plan. Taking appropriate amounts of the substance along with Kratom can help you become healthy and energetic.

Turmeric and Kratom: Can the Combination Boost Effects?

When it comes to treating discomfort, Speciosa is among the best naturally procured herbs out there. Kratom is famous for its surprising analgesic properties owing to its chemical nature.

Each strain has a different tendency to relieve soreness. While some strains like Maeng Da and Red Bali are particularly associated with anti-discomfort abilities, other strains like Hulu Kapuas are meant for energy-boosting.

Just like Mitragyna, turmeric is also an active participant in relief. Curcumin present in turmeric affects the NF-κB proteins that induce cells to release secretions. Thanks to curcumin, cells are unable to release painful sensations making turmeric an effective reliever.

Owing to these phenomenally similar properties of both herbs, amalgamating them with each other can produce an all-around pair.

Ketum achieves its phenomenal chemical makeup from the rich organic soils it grows in. The highlighted components of the herb are its alkaloids, namely Mitragynine and 7-hydroxy-mitragynine.

Other common alkaloids in the plant are Isomitraphylline, Speciogynine, Ajmalicine, Akuammigine, and many more. These chemicals, upon reacting with turmeric, cause energy-boosting, therapeutic, and healing effects.

Turmeric and Kratom: A Match Made in Heaven

Kratom and Turmeric pairing can rightfully be termed as a perfect combination, and most enthusiasts will attest to that. The fact that both organic entities have numerous similarities, including their effects and benefits.

The concept of turmeric and kratom being a perfect blend isn’t directly supported by medical claims. However, there are multiple pieces of research conducted on them separately that testify that both can fuse ideally together.

Curcumin, the most effective component in turmeric, depicts almost identical functionalities to the alkaloids in Korth. Curcumin readily links with the alkaloids, thus strengthening the potency of the herb.

If both are mixed in appropriate amounts, they will exacerbate each other’s qualities, exhibiting remarkable results. So, if you are thinking of experiencing something more potent with an enhanced effect combining the two would provide you just the right experience.

Turmeric as a Kratom Potentiator

People normally use potentiators to either have a reinforced impact or to make the effects last longer. Therefore, using a potentiator can lessen your Speciosa consumption and save you money in return. There are little to no side effects of the herb when taken with a potentiator like a turmeric.

Moreover, if you are an old user consuming it raw, there is a very high chance that you have developed a tolerance for it. Therefore, to counter the problem without maximizing your dosage is to consume it alongside turmeric.

The best thing about combining turmeric with your Korth is that you will enjoy all the health benefits and soothing effects of the herb while keeping its concentration low. When you take Mitragyna in a smaller dosage, the chances of developing your tolerance for it will gradually decrease.

How does it work?

There is no rocket science behind the process of potentiation of kratom with turmeric, but it is rather simply the concept of metabolism. There are certain enzymes like cytochrome P450, CYP2D6, CYP2C9, and CYP3A4 that are responsible for conducting the metabolic activity of kratom in the liver.

However, medical studies have shown that curcumin can reduce the rate of absorption of Mitragyna, inhibiting the metabolism of alkaloids inside the liver. In this way, Kratom can be retained in the body for a longer period, thus increasing the longevity of the plant’s effects.

This will allow you to consume Korth in smaller amounts and feel the exact same effects. Some kratom enthusiasts have also argued that pure curcumin should be paired with Ketum instead of turmeric as it is the main component that interacts with alkaloids.

Because turmeric carries curcumin in smaller proportions, it increases the potency of the herb to a slighter degree. Nevertheless, their logic isn’t backed by any scientific or medical evidence.

The Right Recipe to Potentiate

Only a pinch of turmeric will be enough if you are potentiating your Ketum dose for the first time. However, it might take time and keen observation to prepare the perfect combo that hits the spot.

One way of savoring the enhanced effects of Kratom is to take half a teaspoon of turmeric before ingesting your precious powder. This will make the effects last a little longer than average. Including black pepper in your dosage is also recommended to improve absorption of the dosage.

Turmeric does not get readily dissolved in the bloodstream, which is why black pepper is added to the recipe. Black pepper is rich in natural substances that boost the absorption of curcumin in the blood by 2000 percent.

Cooking kratom tea is the general way of taking turmeric-kratom mixture. Some recommend preparing your recipe by adding 1/3rd of Speciosa to 2/3rd of turmeric. Don’t forget to add a ting of black pepper as it can also induce anxiolytic effects.

Unfortunately, if you are unable to get your hands on turmeric with black pepper, you can go for Theracurmin. This strain of turmeric is water-soluble as the size of its particles is relatively smaller than turmeric. This is why it can be easily absorbed by the liver. Also, keep in mind that, Theracurmin can turn out to be way costlier than standard turmeric.

Enthusiasts suggest taking the mixture on an empty stomach to have an instantaneous and better effect. However, it doesn’t imply that you have to starve yourself for this. You can take a dosage 3 to 4 hours after you have eaten your meal.

A standard approach is to add 0.5 grams of turmeric powder for 1.5 grams of Mitragyna powder. Potentiating your precious strain beyond its threshold can cause certain health risks. High amounts of turmeric can disturb your heartbeat to an alarming extent.

If you feel capable of taking higher doses, going one level up would not harm you. But let’s not forget that the best experiences are gained from consuming moderate amounts.

With an extensive list of benefits of the turmeric and kratom combination, there are, of course, downsides to irresponsible dosage. Before piling up a stock of turmeric and kratom in your kitchen, it is necessary to know the cons of this peculiar mixture.

To prevent any unnecessary and unwelcoming circumstances be wise with your dosage. Higher dosages are normally disapproved. Therefore, you should always be careful while determining your doses and better start with the minimum to have the best experience.

Instead of increasing the amount of turmeric in your Korth dosage, it is best if you use pure curcumin as it prevents kratom toxicity and also prohibits kratom absorption into your liver.

Kratom alone accounts for multiple mental and physical health issues. However, with an amalgamation with turmeric – a substance constituting Mitragyna like properties, the effects can be phenomenal.

Turmeric can be counted among the best kratom potentiators that can make you experience the best. The only thing that can keep you from experiencing the results of this special combo is carelessness while determining the dosage. Be wise with the amounts while preparing your recipes, and enjoy!