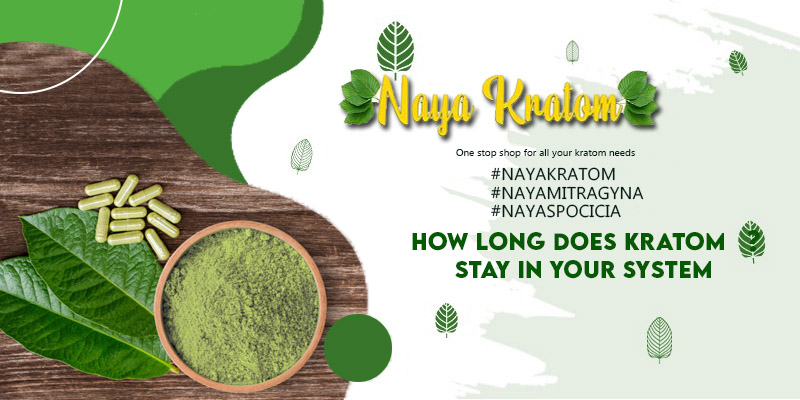 Kratom acts as a magician when it takes away all your problems and soothes you by taking you on a ride. Users of Mitragyna Speciosa (Kratom) have increased exponentially over time, mainly because people want to get rid of their worries and diseases quickly. Others take it recreationally to relax and calm their nerves. But in today’s busy world, a lot of ketum fans like you are concerned about the time it stays in their body. More precisely, how long will the Ketum effects last?

Do you frequently ask yourself how long does Kratom stay in your system?

Well, we are sure you do as no matter what you are doing, you will have to plan your kratom intake and the rest of your life accordingly. You asked us, and we are here for you as in this article, we will discuss in detail how long does Kratom actually stays in your system.

How Long Does Kratom Take to Start Affecting Human System?

On average, Ketum will take 10 to 15 minutes before it starts to show its excellent benefits. These effects will reach their peak in around 40 – 90 minutes. That is when you will feel the real healing power and relaxing benefits all over your body. Kratom will affect your body more quickly if you take it on an empty stomach. Similarly, if you consume kratom with food or after a meal, you will likely feel the effects after an hour or more.

Let us not beat about the bush any longer and discuss how long does Kratom stay in your system?

How Long Does Mitragyna Speciosa Stay in Your System

Although the research carried out on Kratom is not sufficient, the half-life of Mitragynine, the component found in Kratom mainly responsible for all the effects, is around 23.24 hours. Several studies confirm that the half-life of Ketum is no more than 39 hours.

All these figures are subjective and dependent on several factors.

Are you worried about the factors which affect the time Mitragyna Speciosa stays in your system?

Well, worry no more as we will let the cat out of the bag so you can make a more informed decision.

Factors which influence how long Kratom stays in your system

The strength and effectiveness of your metabolism is an essential factor in determining the time kratom stays in your body. Therefore, Mitragyna Speciosa will take more time to eliminate from your body as your age increases.

The effects of Ketum are observed to delay a little bit when it is taken with or right after a meal. Moreover, fluid levels of a body have a very noticeable effect on how long does Kratom stay in your system. Drinking a lot of water or other fluids will help you get any toxins out of your body more quickly.

As discussed earlier, Mitragynine is the most concentrated component in Kratom. Mitragynine dissolves and stores easily in fat. If you have a higher ratio of fats in your body, you are more likely to keep Mitragyna Speciosa in your system for a little longer. Similarly, if you have a low body mass index, you will be able to clear Kratom more quickly when compared to the obese people.

Well, this one is pretty self-explanatory. The higher the dosage, the more time ketum will spend in your body. In fact, due to the complex mix of ingredients found in Kratom, how long Kratom stays in your body increases exponentially with the increase in dosage.

Though this factor is beyond your control, we are discussing it to make sure you do not rely on other people’s experiences with Ketum. Genes also play a role in the time it takes to kick Kratom out of your system.

Are you wondering how much time gap is needed to make sure Kratom is not detected in tests?

Let us tell you briefly regarding the available tests to detect Kratom and the time window, after which Kratom can not be detected.

What are Available Lab Tests for the Detection of Ketum?

Research on the herbal supplement, Kratom, is limited. That is why there are few drug tests available. Some of them are as follows:

Though not commonly used, samples of blood are taken for detecting Kratom. Blood screening can detect the presence of Mitragynine for a few days after it is taken. These tests are also useful for diagnosing what concentration of Ketum is present in your body.

A urine sample can be used to find out the presence of Mitragynine in your system even after a nine-day gap. Urine testing is a relatively more common test used to detect Kratom.

Detecting drugs through the samples of saliva is also a clinical method used for screening. However, due to certain complexities, like the large sample of the saliva sample and high expertise to conduct the test, make this method a little unattractive. Thus saliva testing is not commonly used everywhere to detect Kratom.

So, after realizing how long Kratom stays in your system, are you wondering how the effects are produced in the first place?

Kratom triggers a reaction with the brain receptors and produces effects similar to a stimulant. When Ketum is taken in a little dose, it is reported to have fantastic comfort and relaxing effects. These effects may continue up to 2 hours. When a dosage of around 10 to 25 grams is taken, it produces sedative effects with a rush of euphoria. These feelings are reported to last for almost 6 hours. However, in some cases, this can extend up to 9 hours also.

Nevertheless, the time Mitragyna Speciosa stays in your body varies quite a lot and depends on several factors a couple of which are the same as the ones discussed above.

Are you a pro kratom user or newbie to the world of Ketum?

With time your body will get used to Mitragyna Speciosa, and that is why it is recommended to start with a small dose and gradually increase it over time. If you are a regular Kratom user, its effects will last less long when compared to someone trying it for the first time.

How long will Ketum last in your body if you take it with alcohol?

Can you take Kratom out of your system immediately?

Well, the simple answer is no. Time is the only thing that can kick Kratom out of your system. Thus, it is essential to plan well in advance if you want Mitragyna Speciosa not to be detected in your body. However, one-way Ketum can be kicked out relatively faster when compared to doing nothing is drinking more water.

Can Liver problems affect how long Mitragyna Speciosa stays in your system?

The liver plays a vital role in the metabolization of Kratom. A person with a weak liver, therefore, will take more time to eliminate Ketum out of his system.

Absolutely, yes. Ketum can be taken in several ways. Some people take Kratum directly by chewing kratom leaves. However, this method was more popular in the past. kratom powder is taken directly now or mixed with other things like tea, honey, or peanut butter. Kratom capsules are also a popular way of quickly taking the dose in a fast-paced world today. Whether Mitragyna Speciosa is taken in powder, capsule, or kratom liquid form does not affect a lot. However, the way it is taken is important. Reports have proved that when Mitragyna Speciosa is taken through an injection, it needs less time to be removed from your system. And when it is taken orally, it stays in our system for a longer time. Injected Ketum is reported to have a half-life way less than taking it orally.

On An Ending Note

How long Ketum lasts in your system is purely subjective. On average, the concentration of Kratom in your body it will reduce by half in a day. This may alter due to a number of factors such as diet, dosage, potency, health, etc. Keep in mind the tests to detect Mitragyna Speciosa can identify it even after a couple of days and a maximum of around 9 to 10 days. So, if you happen to be in a situation where you can not have any hint of Kratom in your body, you will have to plan well in advance.