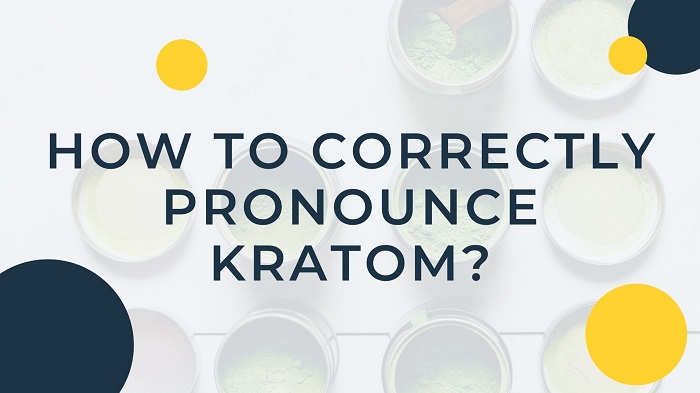 Are you among those folks who cannot even utter a word if they do not know about its correct pronunciation? I can relate to you and the mess you have to go through! Now imagine if you are a kratom enthusiast and heading to a nearby smoke shop or head shop to get your much-loved strain, but suddenly, you get trapped into this shit – How would I pronounce Kratom at the store? You just hunt around for the correct pronunciation of Kratom but fail to know the right one.

If that’s you. I have got you covered.

You are not alone and there are millions out there who have been trying to get done with this quest. However, the debate about kratom’s proper pronunciation looks like a never-ending hassle, but this piece will let you know how to pronounce kratom correctly.

So without further ado, let’s get to know about the correct pronunciation of kratom.

How Do People Usually Pronounce Kratom?

Back in the 1930s, kratom got immense fame and continued to be a go-to herbal remedy for millions of folks, but the popularity receded in the 1950s. Now, we can see that kratom’s use is becoming more common among the USA’s public ever since the 1990s.

According to Lexico.com, which is one of the notorious dictionaries driven by Oxford University Press, Kratom has two common pronunciations. Here’s a brief description of each.

The first part ‘KRAT,” ends rhyming with the word “at,” and the second part, “TUM,” is much like the word “ton.” So when we pronounce KRA-TUM, it is more like KRA-ATOM. You end it up with “atom.”

KRAY-TUM is a more common and famous pronunciation of kratom among Americans. The first part “KRAY,” is similar to the “Cray” of the word “Crayon,” and the second part rhymes with the word “ton.”

Here’s a video link that would help you know how to pronounce this variation correctly.

Well, we have this third pronunciation – Kra-TOM as well, but you won’t find it at lexico.com. Although it is not frequently used, it is essential to have a clue about it. Here, you would pronounce the first part “Kra” as rhyming with the “RA” of “BRA” and “TOM” as it is usually pronounced.

Head over to this video to get an idea of how users use this variation.

What Is The Right Way To Pronounce Kratom?

Do you know Kratom is native to Southeast Asia? The right way to pronounce Kratom is definitely how Southeast Asians have been pronouncing it. In Malaysia, Thailand, and Indonesia, we have observed varying pronunciations of Kratom. Here is a quick overview of each.

How Do Malay People Pronounce Kratom?

Malaysia is one of the popular kratom suppliers in the world and is known for producing the unique kratom strain “Malay”. So how do Malaysians pronounce it?

You won’t believe it, but in Malaysian pronunciation, the “r” of “kratom’ is kept silent. So if you ever encounter a Malaysian Mitragyna user, you would notice him calling it “Key-Tum’ or Kay-tum.” The first part “Key” is pronounced “Key,” and “Kay” as “ay” of “Pay.” The second part “Tum” rhymes with “Ton.”

How Do Indonesians And Thai People Pronounce Kratom?

Head over to this video to get a clear idea of how Indonesian natives pronounce “Kratom.” Listen to it closely and you would notice that they call it Kra-Thom. The first part “Kra” rhymes with “Bra” and the second part “Thom” stresses upon the “th” as the one pronounced in “thief”, and ends with an elongated “om.” SO basically, it is like KRA-TH-OMM.

The folks in Thailand have a completely different pronunciation pattern. Kratom in Thai is pronounced as “Kruh-tome.” They emphasize the first part – “Kruh” and say it fast. The second part – “Tome,” is pronounced as “tom.”

Are you confused about which one you should follow? Well, that’s a legit confusion as all these three countries – Malaysia, Thailand, and Indonesia are famous exporters of Mitragyna Speciosa.

You can choose the correct pronunciation depending on your location. If you live in the US, say a big no-no to the Malaysian accent as they keep the “r” silent. Your fellows would find it hard to understand what you are actually saying.

If you have to choose among the Indonesian and Thai pronunciations, ideally, I would say you should go with the Thai one. The natives of Thailand have a clear yet a bit the same pronunciation as the ones used in the USA – Kruh-tome.

So let’s go back to that nearby store you were resisting to enter and ask for an eight-ounce bag of Maeng Da Kratom?

Oh, wait! What’s up with Maeng Da? How would you pronounce it? Worry not! I have still got you covered.

Maeng Da is one of the widely used strains of Kratom, and you would either pronounce it as Mang-Duh or Mung-Duh. Do not try to elongate it and call it Ma-aeeeee-ng-duh. That’s wrong.

What Are Other Ways Of Pronouncing Kratom?

Speciosa is pretty straightforward and you pronounce it as Spay-cio-sa. Now you know how to pronounce kratom correctly, right?

Since Kratom recently got famous in the USA, people are confused about its right pronunciation. Whether you call it KRAY-TUM or KRA-TUM, it is up to you. Your pronunciation game would still slay. However, it is best to use its scientific name and let others know about it.

Let us know where you are from and how you usually pronounce it? Moreover, do you use its scientific name frequently or the common one?