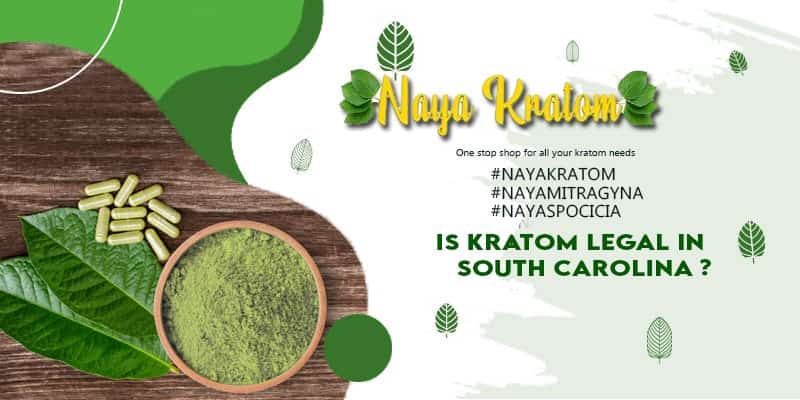 Today Kratom is all that people talk about in America. We see it online in smoke shops, farmers’ markets, and even with medicines in the health stores, but is it legal everywhere? Its legal status, like its benefits, has always been shady and is different in various states, even inside the United States of America. In South Carolina, however, it has been legal since the beginning for about 230 years.

The History Of Kratom Possession And Usage In South Carolina

Kratom was first introduced to South Carolina as a natural herb with some soothing and mood-elevating properties. It was either consumed on peers’ recommendations or as an alternative to other harmful relaxants. It soon became a favorite herb for opium addicts looking for an escape.

The greater demand led to its availability in different forms such as the commonly taken powder, capsules, pills, and tinctures. It started selling commonly at various health and smoke stores and online.

But as soon as the number of cases whose diagnosis showed a connection with Kratom increased, law enforcement agencies became more vigilant. Later in a report in 2018 published by the New England Journal Of Medicine, the Food and Drug Administration stated that the deaths of about 44 people had a connection with kratom usage.

Even before that, in 2017, a federal warning had already been issued to regulate Kratom usage. Owing to these events, one of the largest companies of Kratom in South Carolina was raided under civil forfeiture action. The agencies confiscated a large amount of kratom and related products. Other companies are still operating since no law restricts the sale, purchase, or usage of Kratom in South Carolina.

Are There Any Cities In South Carolina That Ban Kratom?

There have been no national bans on selling, buying, and using Kratom in South Carolina. At the time of writing, there are no current state laws that ban Kratom in the state. However, according to the United States Drug Enforcement Agency, there is “no legitimate medical use for kratom,” and the FDA has not approved human consumption of Kratom.

Where in many states of the USA, you can freely sell and buy Kratom. In others like Vermont and Rhode Island, it is completely banned. The legislation becomes quite confusing when counties ban Kratom, although their head states allow its trade and consumption. An example of such a situation is Sarasota County in Florida. While Florida hasn’t imposed any restrictions on selling, possessing, growing, or using Kratom, it is totally prohibited in Sarasota County.

In short, there is no prevailing law, binding, or legislation that regulates Kratom. Like in other matters, every municipality has the power to pass ordinances regarding activities that are generally not banned at the state level. Nevertheless, in South Carolina, all cities and counties allow the consumption of Mitragyna Speciosa.

Do You Have To Be 18 To Use Kratom In South Carolina?

There are no inherent laws regarding Kratom in South Carolina. Still, in areas on the northern side, while moving towards North Carolina, you have to be 18 to buy the herb. In addition to current legislation, there are no such pending laws that may prohibit the use of this herb in this state.

Where Can You Buy Kratom In South Carolina?

The best thing about Kratom being legal in any state is that finding it around you is not very hard. The best option would be to buy online. Various online kratom vendors provide lab test reports and are well aware of the state laws.

This saves you from getting into legal complications and makes sure that you get the pure herb. On the other hand, if you still want to test and buy, you can find various vendors selling varieties of Kratom in North Carolinian streets, in health and smoke stores.

What Is The Kratom Consumer Protection Act?

In many states, agencies concerning health have raised alarms regarding the free sales of Kratom; however, many other advocates for its usefulness and effectiveness. The Kratom Consumer Protection Act is the most significant movement that aims to safeguard the legal status of Kratom in any state at the cost of increased regulations. The act was designed by American Kratom Association and the Botanical Education Alliance (BEA) and cover areas like:

What Is The American Kratom Association’s Role In Regulating Mitragyna Speciosa Usage In South Carolina?

As the name suggests, American Kratom Association is an actively performing agency in America that has challenged any legislation aiming to ban Kratom. They have designed GMP regulations for kratom vendors. Though not enforced by the FDA or Food and drug administration, these regulations have played an essential role in regulating the use of Kratom.

They make sure that vendors sell high-quality herbs. They are working for the adoption of the Kratom Consumer Protection Act by all the states of America. By this, their main aim is to make the kratom industry safe for consumers and lawmakers.

Do You Have To Worry About a Change In South Carolina’s legal Status Of Kratom In The Near Future?

As of now, you don’t have to worry about a change in the legal status of Mitragyna Speciosa in South Carolina. Kratom is not regulated at a federal level, and there are no talks of banning it at the state level. The best thing for any seller or consumer would be to remain in touch with the state laws constantly.

The bottom line is that as of now, it is fully legal to buy, sell, possess or grow Kratom in South Carolina. While buying, make sure that the vendors are registered with the American Kratom Association. In addition to that, customer reviews can help understand the company’s reputation and quality of the product. Asking a lab test report regarding the purity of the herb is not taboo.

It is to be noted that no information discussed above is in any way enforced or evaluated by the Food and Drug Administration or any other health practitioner. The product mentioned above is not designed to diagnose, treat or cure any disease. Before using any drug/herb, please consult your physician.