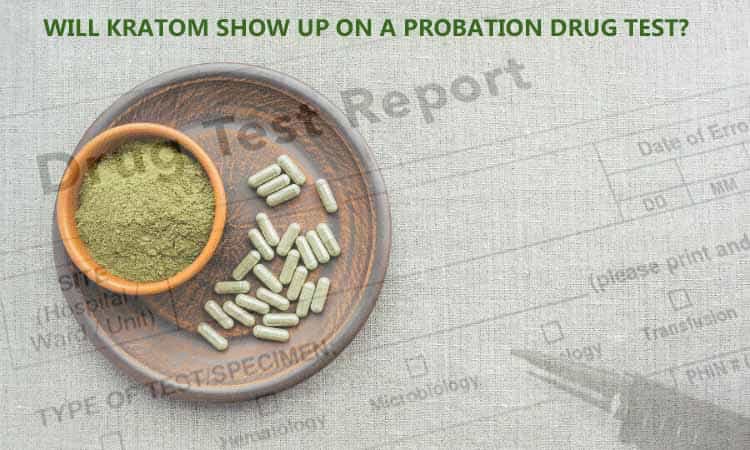 Kratom is known for its stimulative after effects and has been used as a herbal medicine for over two hundred years in Southeast Asia. In the states, however, it is consumed for its energizing qualities and sedative effects. So while it was about to become a controlled substance a few years ago, the DEA decided to allow its use due to public demand.

The question about whether or not it shows up on a probation drug test isn’t as rare as you might think. Many kratom consumers want to know about their favourite substance’s effects on the body and if it can show up on a drug test, and if so, what kind of drug test? A particular one or all of them?

This article discusses the half-life of kratom, its potential of showing up on a drug test and dives deep into the various factors that contribute to its longer stay in your body.

How long does kratom stay in your system?

Before we get to our main topic of discussion, we need to consider the factors that might lead kratom to show up on a drug test. So, how long does kratom stay in your body? Unfortunately, the research doesn’t provide on-point information since many studies have been conducted on this topic and have only been tested on animals.

Based on the research, one of kratom’s compounds has a half-life of 24 hours. Keeping that in mind, it can take a day for kratom to clean half of its content out of your system and about five or six days for it to wipe out of your body completely.

While this is considered common knowledge based on average research, it is not accurate. Other various factors contribute to kratom staying for shorter or longer periods.

What are the factors that contribute to kratom staying in your body?

Like other substances, kratom also stays in your system depending on metabolism, age, gender, and other various influences. Some of the significant factors are:

Of course, your kratom dosage can be an integral part of its stay in your body, and heavy doses can take a while to clean out of your system. Plus, if taken orally (pills, tea), it will stay longer in your body than if you smoke it, although smoking kratom isn’t that common.

As you age, your metabolism gets slower, and it takes twice as much time for substances such as kratom to metabolize. Older users have a slower metabolism and other age-related changes in the body that makes substances harder to break down.

Consuming kratom on an empty stomach will keep its stay shorter as opposed to consuming it after a fatty meal. So your diet can play a part in its stay in your body. Plus, having water can help clean the traces of kratom faster than letting it wipe out naturally.

So, does kratom show up on a drug test?

One of the reasons for kratom’s popularity is that people believe that it does not show up on a drug test, which isn’t accurate. It can show up on drug tests, but the factors mentioned above contribute to it. Though kratom does not show up on standard drug tests such as SAMHSA-5, the 10-panel drug screen test is used for identifying kratom consumption, while the other tests can find the presence and traces of kratom.

The research is limited, so it’s not accurate for how long the traces of kratom are shown on a urine test, but a urine test can identify its presence as well as traces in your system. But if kratom were to become illegal in the states, urine tests are going to be conducted to identify its correct usage.

Blood tests can show traces of kratom even after a long period of time. For example, if someone consumed the substance a few weeks ago, the traces of kratom and the metabolites could be identified in a blood test.

A lot of drugs can be identified with hair follicle tests, and it is one of the most conducted tests for drug usage. Though, there isn’t much evidence that hair tests can prove or identify the usage when it comes to kratom. However, with time and research, it can be established later on.

Saliva tests or mouth swab tests are often used to identify drug usage, and they can probably identify kratom traces. But since kratom isn’t an illegal substance, it’s not known to be used for identifying its consumption.

Six states have made kratom illegal for purchase and consumption, namely, Alabama, Arkansas, Indiana, Rhode Island, Vermont, and Wisconsin. While most of the states have it legalized, some cities and counties have their regulations regarding the recreational use of kratom. For example, kratom is legal in California but banned in San Diego, and it is also legal in Florida, except it is prohibited in Sarasota County.

As public demand for its usage increases, these exceptions are going to ease the laws regarding kratom usage. Just make sure you’re up to date with your local laws about kratom consumption.

It’s good to know the possibility of kratom showing up on a drug test, and with the above information, you can have a head start before going into a new job or something corporate-related that requires you to take a drug test.

On the plus side, if you’re a seasoned kratom consumer, you may want to cut some dosage beforehand as your scheduled drug test comes closer. But not to worry, you won’t get into any legal problems since kratom is legal in most parts of the states. Just make sure your state has it legalized to avoid any unnecessary trouble.