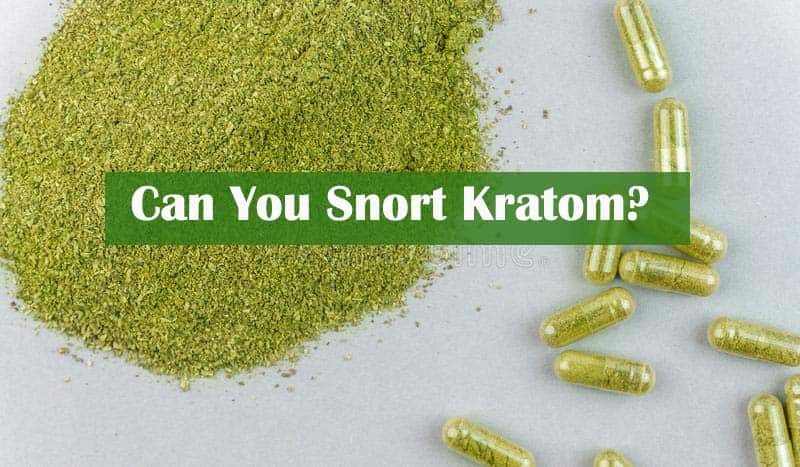 Snorting drugs seems like a fascinating idea for a lot of people interested in trying different products or ways of consumption. Kratom is mainly consumed orally for various uses, including mood elevation, relaxation, and discomfort relief.

In some cases, kratom enthusiasts use the substance solely for recreational purposes, and this is why they keep exploring faster ways to feel the effects of kratom.

In this article, we’ll discuss snorting kratom and whether it’s a good idea to consume the substance this way. But first, let’s dive into how kratom is absorbed in your body.

Kratom is taken in capsules, pills or powder form and can be consumed by chewing fresh leaves or making tea with dried leaves. It is often mixed with coffee or chocolate drinks to mask its bitter taste. It can also be combined with other strong substances to produce a more potent effect.

When you take kratom, your body absorbs it through your gastrointestinal tract, which includes the esophagus, stomach and intestines.

Your body’s metabolic system begins breaking down the chemicals in kratom as soon as they reach your small intestine. The liver then converts these chemicals into other compounds that can be easily absorbed by cells throughout your body and carried throughout your circulatory system.

One of the fastest ways to absorb kratom is by smoking or snorting the substance. When you snort kratom, it enters your bloodstream through the mucous membranes and travels to your brain quickly. Some users prefer snorting because they believe the effects will be more potent and felt faster than other methods of absorption.

Why do people snort Kratom?

Snorting kratom has some advantages over other methods of consumption in terms of absorption in the body and its strong effect. This is why some kratom consumers prefer snorting kratom:

When you swallow kratom, it goes through your digestive system before entering your bloodstream. This process can take up to 45 minutes, during which time there’s no way to know how much of the drug will actually make it into your system or what effect it will have on you.

Snorting kratom allows for more rapid absorption of active ingredients like mitragynine and 7-hydroxymitragynine (7-HMG). Snorting these alkaloids bypasses the gastrointestinal system completely and sends them directly into your bloodstream via nasal passages. This results in effects that may begin within 10 minutes instead of consuming kratom via this technique.

Consuming drugs orally causes much of the substance to be absorbed poorly into the bloodstream via the gut. This causes less kratom to reach the nervous system. Moreover, oral consumption results in increased bioavailability of kratom, which may not be a preferred choice for some users.

On the other hand, snorting kratom results in faster degradation of the active compounds, which means more intense effects are felt with smaller doses of kratom.

The main active ingredient in kratom, mitragynine, helps combat addiction because it affects the same neural pathways as opiates. The herb may be used by some to wean themselves off of harder drugs such as potent prescription painkillers. Many users may resort to snorting kratom for this purpose to detach themselves from the effects of other strong substances.

Is it safe to snort Kratom?

While it’s possible to snort kratom powder, it’s usually not recommended. The reason why snorting kratom isn’t a good idea is that it’s risky. Kratom powder has a high amount of cellulose and plant fiber, both of which are ineffective and don’t produce any desirable effects.

Why is it a bad idea to snort Kratom?

Here’s why kratom insufflation is a bad idea:

It’s dangerous to snort anything, and the risks are increased with kratom because it’s a powder. Snorting anything can result in nosebleeds, irritation, inflammation and even infection.

Kratom can cause severe burning and irritation of the nasal passages if it’s inhaled into the lungs. This happens because kratom powder is made up of large, coarse particles that can irritate the nasal passages and lungs. It also causes a burning sensation in your nose and throat as well as coughing, sneezing and other symptoms of respiratory distress.

Snorting kratom is also more expensive than taking it by mouth because users would need to buy more kratom powder. This is because a significant amount of kratom powder is required to be snorted to cause the desired effects as compared to ingestion.

In addition to the side effects, snorting kratom can be addictive, just like taking it orally or smoking it. If you develop an addiction to kratom by snorting it, you’ll have withdrawal symptoms when you stop using it — just like with any other drug.

When snorting kratom, the cellulose and plant fiber may build up in your upper respiratory tract and obstruct the pathways, making it difficult to breathe. This may pose a risk of kratom overdose and result in the following symptoms:

Many people who are dependent on some drugs have a high chance of resorting to snorting kratom, which carries a risk of kratom dependence and abuse. This is because they want to break free from the habit of consuming hard drugs and use substances like kratom to wean off the effects.

However, it’s important to break this cycle and incorporate safer ways and habits to reduce the dependence and develop healthy mechanisms in the body, rather than choosing risky techniques of drug consumption.

Are the effects of snorting Kratom more potent?

No, kratom users don’t feel more potent effects when snorting kratom. This is because the herb doesn’t last for as long as when ingested. But, on the flip side, you get to experience more enhancing effects when you swallow kratom because it is absorbed more through the gut lining.

Since snorting kratom should be avoided at all costs, you may wonder if there are safer ways to consume the product. Many people may resort to smoking kratom but it should be avoided as well since it carries the risk of causing damage to the respiratory system in the long run.

Here are the safest ways to use kratom:

Brewed kratom tea is the most popular way to consume this herbal supplement. The tea can be made from fresh or dried leaves, although fresh leaves are more potent.

It can be steeped for about 10 minutes before drinking with hot water. You can sweeten the tea with honey or other sweeteners if desired.

This method of consumption allows the body to absorb all of the benefits of kratom in an easy-to-digest form.

This is another safer way to take powdered kratom because you don’t have to worry about any side effects associated with snorting it. Moreover, capsules or pills are also easy to store at home or in your purse or pocket if you’re traveling on the go.

These capsules are available in different strains and dosages so make sure you choose the right one according to your needs and requirements before buying them from any local store or website.

What should you do if you experience unpleasant symptoms of snorting Kratom?

Though it’s uncommon to snort kratom and there haven’t been many cases of this consumption method, it’s still important to know a few things about snorting kratom. First and foremost, if you experience any symptoms, get in touch with your physician and make sure you don’t wait to avoid worsening the condition.

Moreover, try switching to safer alternatives to consuming the herb to avoid the risk of serious side effects.

To minimize the risk of worsening symptoms, follow these guidelines:

Snorting kratom is possible but should be avoided to reduce the risk of unwanted health effects. There are safer and more effective ways of consuming the herb that will give you a more beneficial outlook and keep your system regulated as per the dose you consume.