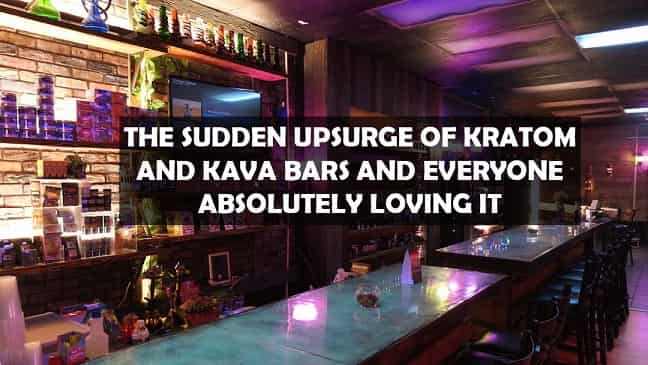 You must have heard of the new trend of Kratom and Kava bars in your local area. Though, tell us truthfully, what did you feel when you saw it for the first time?

A bit weirded out -we are sure.

Well, two herbal drinks are making their way into bars.

You wouldn’t have known what it exactly was or why people would want to drink it.

Well, don’t get all worked up just yet because we will give you the answers to all the questions that are running through your mind right now.

Let’s discuss what happened with these two unique plants:

Kratom has recently become popular, but it has been used in Southeast Asian countries for centuries. However, if you want to experience its benefits, we recommend using Kratom capsules. It works splendidly because it consists of only natural components considered safe and healthy.

Like Kratom, Kava was also used by the Polynesians for hundreds of years. They consumed them as an integral part of their spiritual ceremonies. They sat together and enjoyed this drink mixed with other substances such as water, juice, and even honey.

The Rise Of Kratom And Kava Bars In The US

Kratom bars are popping up across the United States, including The Kava Bar in California. Kratom bars may be the next big trend to hit the US bar scene – with many states already seeing a sizable increase in this beneficial botanical’s consumption at bars and restaurants. This is not surprising considering its popularity as an alternative to some pharmacological drugs.

According to some users of these establishments, Kratom and Kava bars are also popular among people who want to socialize with friends and try something new.

Kratom has become so popular that even bars across America have begun to carry their products in new bars in Los Angeles that have opened only this month. Similar bar concepts have already popped up in major cities, including Washington DC, New York City, Portland, Denver, Seattle, and Austin.

Bar owner of Purple Lotus Kava Bar has claimed that 30-40% of his sales are thanks to Kratom.

Talking about the Kava bars -it can be described as an establishment that serves Kratom mixed with other plants, drinks, and extracts. These establishments are growing in numbers throughout the United States. Today, there are about 150 Kava bars in America, and that is some good numbers -considering these herbal plants have grown in popularity in the country only recently.

According to some experts, these establishments are popular in America because people want natural alternatives to medicating their discomforts. Kava bars are also attractive because they are open late at night, typically staying open until around 3 am. Even though they close earlier in some places, they only operate during certain weekdays. They often don’t require an entry fee.

For those who enjoy using this plant, there are many places they can go to build a community and bond with others. Kratom and Kava bars allow patrons to bring their friends and enjoy the company of strangers in a friendly atmosphere.

What Can You Order On A Kava Bar?

As we have described earlier, Kava bars are where you can drink an organic beverage known as Kava. There are some excellent reasons you should visit these places and try out their menu.

Firstly, Kava is an organic drink. It does not have any harmful ingredients in it. While other beverages may be more popular, it is the only one with no adverse effects on your body whatsoever.

Kava Bars also sell hot and cold teas with some quality infusion of herbal substances like Kratom, Yerba Mate, and Kombucha. These all-natural botanicals have stimulating effects if you dive deeper into the relevant research. While you can’t get high from drinking these teas, some restorative qualities will let you stay up all night with no problem at all.

Such bars offer a wide variety of choices for drinking. For example, you go in and order a sampling cup. They let you try different drinks right away, allowing you to get the most out of your time there. If you want to try something new or have a strong urge to talk about your opinion on certain strains with the staff members, this is the perfect place for it. These bartenders know everything there is to know about Kratom, Kava, and many other herbal substances.

The employees at these bars will also tell you what each one does so you can decide which strain of Kratom would blend best with your drink. You can find all different strengths, from relaxing to uplifting. Pick one that’s right for you.

For example, you can go to Nakava Bar at Boca Raton, Florida, and try out Kratom mixed with Kratom tea shot blended with pina colada, lemonade, tiramisu, creamer, and whatnot for a fantastic price of $7. Another Kratom and Kava bar named Kava Culture serves to ground and squeeze Kava plants as a cold beverage in coconut shells or traditional bowls. Also, they brew Mitragyna leaves into a hot tea and serve them with fruit juices like mango or guava juice for the customers to enjoy these herb drinks deliciously. Moreover, some of these Kava Bars offer discounts on specific days.

Is Kratom And Kava Same?

One of the most significant similarities between Kratom and Kava is their recipes. Both of them are harvested and cultivated under tropical weather. Besides them, they are brewed into different forms like capsules, ground powder, or tea. According to a Reddit user, the most important thing to remember here is that drinking them together can cause dehydration.

Kratom and Kava bar customers that frequently visit these places have claimed that both of these herbal plants have a lot of similar effects. According to users on Reddit, Kratom helps in focusing, is excellent for mental health and meditation, enhances good mood, helps calm the discomfortness, manages distressing, and has made the life of its user pretty easy in general.

Similarly, Kava also relaxes its users and helps them sleep better. Moreover, many Kava users have also claimed to calm their uneasiness with the help of this herbal drink.

Both the botanicals cause nauseated effects if taken in heavy amounts, together or separately.

What’s The Difference Between Kratom And Kava?

Kava is a plant that is natively found within the Western Pacific, such as Hawaii, Vanuatu, Fiji, and Tonga. The inhabitants of these islands have widely used them for years. Even today, its use goes far beyond simple social or recreational services. It is a plant they have found that has positively affected their day-to-day lives.

Kratom comes from a tree known as Mitragyna Speciosa, which hails from Southeast Asia. The natives of this region have used it for several hundred years. Its leaves are enjoyed by those looking for an enhanced stimulant or relaxing sedative effect. It depends on what strain is being consumed and how much is ingested.

Both plants contain alkaloids as well as some other active ingredients. It should be noted that Kava has a higher content of these active compounds than Kratom, making it more potent.

Legality Across The US

The legality of Kratom is somewhat ambiguous, depending on where you are. Although the FDA has not approved the use of this plant as safe, it is legal to sell, buy, and use in most states in the US. Regardless, many kava bars stock it without legal repercussions since they technically sell a tea made from a plant and not a scheduled drug.

The good thing is that Kava is entirely legal all over the US. It is put under herbal supplements that make it easy to use. It is widely available in grocery stores, pharmacies, food shops, and other regular shopping places.

Interestingly, Kratom and Kava bars are also attractive for those looking for natural alternatives to prescription medication or alcohol that is often illegal for those under 18 years old. While Kava is not as widely available as alcohol, it is legal in all fifty states for those under and over eighteen years of age. This makes them an attractive diversion for those who cannot legally buy or drink liquor.

What Impact Does Kratom And Kava Bars Have On Our Society?

The kratom and Kava bar business is starting to show success in America. Many of these establishments throughout the USA are continuously popping up each day.

According to experts, people enjoy socializing with friends or strangers while experimenting with something new. These bars are also attractive for those looking for alternatives to stress reliver and alcohol that are safe and natural.

Some Of The Popular Kratom And Kava Bars

Can You Drink Kratom And Kava Together?

With the ongoing spurge about kratom, it is better to avoid uptake of both idealities together. The reason is that almost similar morphology can lead to destructive outcomes.

According to a Reddit user, mixing too much Mitragyna and Kava together led to puking out all of it. Regardless, if he mixed in moderate quantities, it helped sleep peacefully through the night. However, one Reddit user even mentioned the calming effect after mixing the two.

In conclusion, the sudden upsurge of Kratom and Kava bars has been an excellent success for locals.

Not only can they get their favorite drinks in an atmosphere that is welcoming and inviting, but they also offer them new tastes from around the world without having to leave town.

If you’re looking for a fun drinking experience with friends or want to sample some new flavors, give one of these places a try tonight.