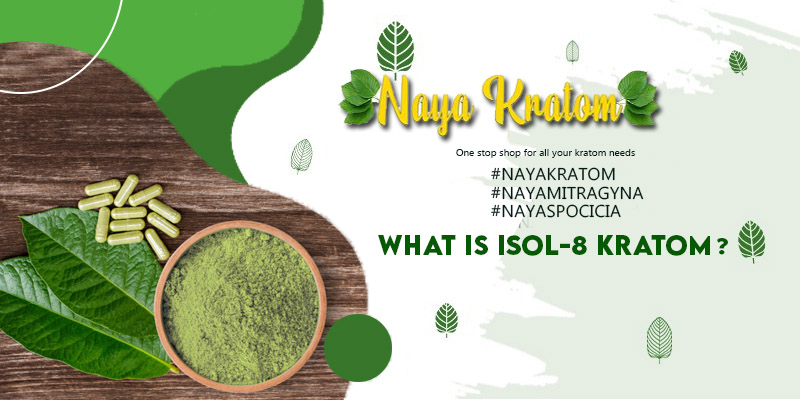 A new kratom product to hit the online shelves is ISOL-8 i. Boasting 8% Mitragynine plus over 10% total alkaloid, ISOL-8 has shown to be a consistent and a super quality Kratom extract and sure to be a popular kratom product amongst the kratom vendors.

What is ISOL-8 Kratom extract?

It’s been called a “standard extract,” but I would argue that it is anything but. Whereas kratom extracts like UEI contain high levels of all active alkaloids, ISOL-8 is specifically standardized to contain a minimum of 8% mitragynine, the indole-based agonist that normally occurs at 1.2-2.1% in dry kratom leaf.

Mitragynine is a dynamic alkaloid which possesses exceptional analgesic properties. In low concentrations, mitragynine induces clean energy, mild stimulation and a sense of euphoria. At larger doses, it has antinociceptive effects and can be rather sedating.

Obviously, given the sheer volume of mitragynine present in ISOL-8, its sedating effects can be quite profound. This is one of the reasons why it has attracted a lot of attention of late.

ISOL-8 is the one kratom extract currently on the market that elicits caffeine-like effects with a substantive energy boost. At a responsible dosage, users report hours upon hours of endurance, increased attention and significant stimulation.

ISOL-8 is made from several different kratom strains, resulting in a high volume of numerous naturally-occuring alkaloids. The process by which this extract is prepared makes it more of an isolate than your typical kratom tincture.

Each ISOL-8 kratom extract may contain as much as 12.5% mitragynine which is, by far, the highest concentration I’ve come across. Unlike other extracts, its purported effects tend to come in waves with a longer duration than most.

Why is ISOL-8 getting so much buzz?

If you haven’t already figured it out, ISOL-8 is becoming massively popular because of its very specific and acute effects. While other extracts yield a broad range of effects, ISOL-8 targets a precise area and zeroes in on just what certain people want out of an extract.

You get all of the attentiveness, sharpened focus and alertness of a good caffeine buzz without the jitters, nausea or jumpiness of the same. This makes sense given that kratom comes from the coffee family of plants and is, therefore, meant to stimulate.

Due to the nature of its preparation, ISOL-8 kratom extract is rare when compared to your average kratom strain, thus making it a must-have item for serious kratomites.

Where can you buy this stuff?

Check out best kratom capsules post to learn about the vendors that sell it and what THEY think about it.