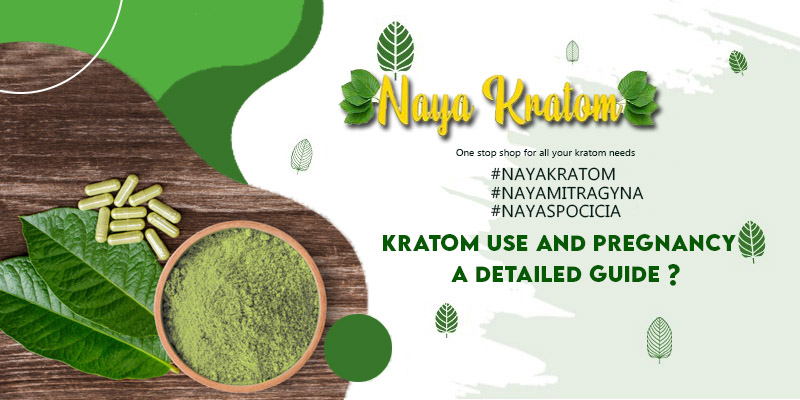 Kratom, which was once notorious as a controversial and controlled substance, has now stormed the popular medical culture like anything. It is nicknamed “the miraculous plant” that promises nearly a “cure-all.” Its antioxidant, anti-inflammatory and analgesic properties are commonly prescribed remedies for all sorts of disorders and diseases- from inflammation, discomfort, sleep issues to neurological disorders and cancer.

However, when its use during pregnancy arises, people are in a constant state of uncertainty.

Pregnancy can be a very special and magical tie between a mother and her unborn. However, this is also the time when she’s at her most sensitive point as she undergoes an emotional rollercoaster ride. Unfortunately, with deteriorating mental and physical health, most of them find solace in unhealthy or, at times, even malignant substances or drugs- unknowing or unaware of the irreversible destruction it can trigger. Therefore, it is crucial to remain informed and educated about all the healthy choices.

Ample concerns and worries are clouding a preggo’s mind- the most critical one about prescription and over-the-counter synthetic medications. There is this rumored belief that one alternative and natural remedy to preserve the health and that of the baby is incorporating Kratom products in the daily regimen, such as tea, powders, tinctures, and capsules. Thanks to the greedy profit-grabber Kratom companies toying with the emotions of their consumers.

BEWARE: To state that Kratom can be conveniently and safely consumed during pregnancy is nothing less than a wild claim. Or more appropriately, a deceptive claim. A hoax. A trap.

This ultimately brings forth a trail of questions: Why is Kratom not safe? How does it work inside a pregnant body? What is its impact on both the mother and her growing baby?

Therefore, this article intends to comprehensively cover all these aspects (before you begin your search down the Google worm-hole).

So, let’s start with the basics:

Is it safe to consume Kratom during pregnancy?

When you’re pregnant, more often than not, you crave to sup a quick pick-me-up tonic. As such, Kratom seems to be the answer for many women.

To the end of time, women worldwide have heavily relied upon plant-derived and other botanical medications in pregnancy to achieve their health and wellness goals. Similarly, Kratom is an all-natural, herbal supplement belonging to the family of the caffeine tree.

Then why the big if’s, the but’s and the strict no’s?

The short answer is: Kratom’s impact is much more pronounced and potent. However, the long answer is much more complicated. So, instead of jumping to conclusions or implementing the wrong treatments, it is better to develop a deeper understanding of the complex dynamics.

Better Be Safe Than Sorry!

Unfortunately, there is no dependable research on humans so far that can conclusively establish Kratom’s safety and efficacy during pregnancy. There is a dire need for a thorough investigation on all medical fronts to reaffirm whether or not Kratom renders the same results in pregnancy as in a normal body.

In addition, there exists a persistent issue of contaminated, inferior-quality, and artificial or fake Kratom sold by sham vendors. This can lead to severe bacterial infections and do more harm than good. Equally important is Kratom’s secure packaging and quality-control processing that requisite specific hygiene standards (set by the cGMP i.e., Current Good Manufacturing Practices) and state-of-the-art technology. And unfortunately, not all suppliers are in a position or capable enough to adhere to the guidelines.

How Kratom works in pregnant bodies?

With several studies underway, the final verdict about Kratom’s exact mechanism in a pregnant body isn’t definite. At the moment, it is too vague to understand.

A Kratom leaf constitutes more than forty distinct active alkaloids. And each strain and sub-colored vein (from amongst the Red, Green, and White) feature enormously varying ratios of these alkaloids. So, it’s quite tricky to answer the effect of each strain since it all boils down to the alkaloid concentration and their interplay with our brain receptors.

Among these compounds, the two key and the most abundant ones are Mitragynine and the 7-hydroxymitragynine, known for their partial agonist activity.

The Impact of Kratom during Pregnancy

Do you know what tags along with the baby package? Decreased energy levels, unbearable stress, discomfort, and uneasiness. No wonder moms-to-be are often tempted to resort to the use of Kratom supplements to ease these symptoms. So say you simply couldn’t resist and have had your dose of Kratom.

Now, what to expect? The following summarizes the after-effects of Kratom use:

Feeling lethargic while pregnant? An exquisite Kratom product might just be the thing you need to perk up and get motivated. Take a small dose of Kratom between 1 to 4 grams and receive a sudden burst of energy and motivation. In addition, it will remarkably improve your concentration levels and increase sociability. The onset of the impact is typically felt within 5 to 10 minutes of ingestion and lasts for 60 to 90 hours.

There is enough evidence to state that at high doses, Kratom mitigates, curbs discomfort, and triggers a euphoric high. The preferred quantities to unwind, unnerve after a hectic day is 5 to 7 grams. However, for pregnant women, it is STRICTLY not advisable to ingest unusually large amounts.

If you wish to attain a “middle-road,” then a Moderate dose will work perfectly for you. 3 to 4 grams of Kratom will help users take control of their stability and mindfulness.

What are the risks involved?

So, the extent of safety, benefits, or harm that Kratom exposure ensues during pregnancy is unclear. However, what we know is, just like substances are deemed strictly unsafe in pregnancy, the same applies to unregulated Kratom.

There exists substantial anecdotal research highlighting the potential dangers associated with using substances during your pregnancy. Hence, the same outcomes can be extended to Kratom as well:

A couple of studies were executed to explore the way Kratom consumption affects a growing fetus deeply. The subsequent results suggested that it might meddle with the newborn’s brain receptors, formation, and growth.

According to the findings of a 2019 Study by Poison Control Centers involving seven cases, five infants were born with withdrawal symptoms because their mothers had regularly taken Kratom during pregnancy.

(For those wondering, Withdrawal is a type of drug dependence, whether prescribed or recreational, that develops after prolonged use).

Have you ever had a chance to witness withdrawal symptoms in some newborns? Ranging from the curable ones to the more life-threatening ones, these include:

The above complications of Withdrawal call for immediate treatment and may last for days, weeks, or even a lifetime.

Consumption of an unnecessarily large dose of Kratom by an expected mother will inevitably expose her and the fetus to the perilous reaction of sustenance. The adverse reactions include:

In addition, there is always this risk of Kratom overdosing, which may induce a host of other issues that may worsen in pregnancy. Therefore, mothers must keenly watch out and monitor for increasing dependence on the substance.

Even with the advancement of contemporary pharmaceuticals, it is not uncommon for preggos to use herbal remedies in conjunction with mainstream medical care.

If you are a die-hard Kratom lover, then it is always a good idea to know what real-life preggo kratom users went through! So, let’s have a look at the encounters of two such women:

Like many other aspects of the herb, Kratom’s impact during pregnancy is complicated, controversial, and largely unsearched. The wealth of information available on the Internet is not only overwhelming but, at times, dangerously misleading. Therefore, scientists, researchers, herbalists, and the medical community throughout the world have joined hands in an attempt to probe further and gain better insights and understanding of Kratom’s impact on a pregnant body.

We hope that the article will serve as a valuable guide wherein we put all myths and claims supporting Kratom use in pregnancy to rest. Wishing you all the best for your journey!

Words of Wisdom: Enjoy this beautiful phase till it lasts. Keep Kratom and similar supplements at bay. Exercise caution and get ample quality prenatal care. And as soon as the little angel arrives, you can shop and order online your favorite Kratom and enjoy it to your heart’s content.

Medical Disclaimer: The article is purely for educational and awareness purposes. By no means does it intend to suggest Kratom’s use if you are pregnant or planning to conceive. Instead, we urge you to terminate your regular Kratom dose and immediately consult your Gynecologist or Medical Expert to figure out effective ways to withdraw and resort to more healthy alternatives safely. Abrupt shunning of the use may interfere with your mental health. So we highly recommend you talk to a trusted professional for the best course of action. And, trust us, there is no need to feel any guilt, shame, or remorse in doing so; a lot of like-minded mothers are with you!