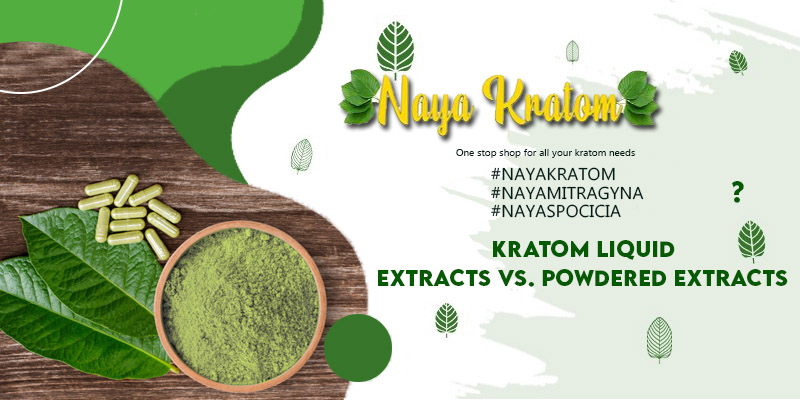 The famous traditional herb, Kratom (Mitragyna speciosa), is no longer dependent on its introduction. It is readily available worldwide, is legal in the majority of the world, and has a wide range of benefits. Thus, it is the most popular medicinal herb today, used regularly by the vast number of its fans around the world. As popularity reached new heights, people explored the world of Kratom in-depth and came up with several forms in which it can be taken.

But before we discuss them, let us ask you what do you prefer, Kratom Liquid extracts or Powdered extracts?

Well, the saying that “What is good for you, may not be good for me” is quite relevant in this regard as the choice and preference varies from person to person. Some prefer liquid extracts, while others prefer powdered Kratom. Alternately, capsuled Mitragyna is also becoming a popular way to take Kratom in this fast-paced world. We know that a lot of users stick to a particular form of Kratom and are nervous to try any new form of Mitragyna.

Well, do not be nervousness anymore as we will shed light on both liquid and powdered Kratom to make sure that no confusion remains in your mind.

Powdered Kratom tends to have all the components and elements of the original herb. This is because the entire Mitragyna speciosa leaf is crushed and ground to obtain powdered Kratom. That is why powdered extracts are a little diluted compared to the liquid extracts, which are prepared by boiling leaves in water.

The boiling of leaves extracts all the highly active alkaloids of Kratom, like mitragynine and 7- hydroxymitragynine in the water, which takes the form of a thick paste. A thick paste full of Kratom key alkaloids making the liquid extracts potent and concentrated. Nevertheless, this high potency is not always the case as the supplier may combine Kratom with other similar additives, and thus, potency varies from vendor to vendor. This means that you should take caution when moving from one supplier to another, and if you buy Kratom from a new vendor, do not use the same old dosage.

Liquid extracts are the refined version of Kratom and thus involve more risks, discussed in detail later in the article. The bottom line is that powdered Mitragyna is milder and softer than the liquid one, and that is why Kratom powder carries fewer dangers. If you are a new Mitragyna speciosa user, then we would highly advise you to try powdered Kratom first.

Are you looking to get rid of your plan and nervousness quickly? Or are you someone who takes Kratom for better sleep but forgot to take your dose well before your bedtime?

Mitragyna liquid extracts can be prepared using a number of methods. Typically, the chemical components of dried leaves are extracted by boiling it in water. If you ever try to prepare it at home, let us tell you it is not a cup of cake. Go for the packaged liquid extracts as they are more standardized and consistent. However, if you are a fan of homemade items, you can always crush and ground Kratom leaves into fine powder at home just by using a coffee grinder or a mixer.

Liquid Mitragyna is far easier to store than powdered Mitragyna. Several factors directly impact the quality of powdered Kratom. You will have to protect it from sunlight, water, and even air, or else it will lose its actual potency. On the other hand, you can carry liquid Kratom with you easily. It is more comfortable and convenient to store and use when compared to powdered extracts.

Check out how you can store your kratom to improve the shelf life.

Which of the two forms provide better effects?

Both Liquid extracts and Kratom powder come from one original source. Thus, the effects are the same. However, the intensity and timing vary. Liquid extracts provide you with quick relief and will make sure that you are relaxed and calm for the rest of the day. Comparatively, powder takes time to show its excellent benefits. Overall, for regular Mitragyna speciosa users, liquid extracts produce better results.

Let us provide you a few reasons why you should choose Kratom liquid extract.

The use of Mitragyna speciosa, in combination with other drinks, is now more common than ever. Kratom liquid extracts come entirely handy here as they are very soluble and can mix easily with other liquids. The benefits of liquid extracts are not just limited to this. It also gets easily absorbed and gets digested quickly and easily. Now you know that extracts are the only way to go if you want to feel the fantastic effects of Mitragyna swiftly.

Mitragyna liquid is more convenient to handle when compared to powder. Are you unable to understand why? Just think what is more convenient for you: Using powdered milk or liquid milk to prepare your morning tea or coffee, and you will have your answer.

Kratom extract is a highly concentrated liquid. The same amount of liquid Kratom will have a far more substantial effect when compared to taking powdered extracts. Therefore, you cannot match up your dosage of Mitragyna powder with liquid extracts. Especially if you are new to the world of Mitragyna, you must be aware of the potential dangers of liquid Kratom if taken excessively.

Not only when abused, but liquid Kratom can also produce adverse side effects when taken in moderation. These side effects range from nausea, excessive sweating, muscle spasm, discomfort, insomnia, runny nose, heightened aggression, etc.

Powdered Kratom is the go-to medicinal herb you can take to relieve all your stress, and nervousness. If you are a fan of trying new things, powdered Mitragyna extracts offer a great variety of different types of Mitragyna speciosa like Maeng da, Bali, Sumatra, Indo, Borneo, etc. You can use Kratom powder to brew tea. Moreover, you can even mix it with your favorite cuisines and other items like honey, Nutella, or peanut butter.

Are both the forms similar in any way?

Both of the forms of Kratom come from one common source, and thus they both produce the same effects. Hence, you do not need to worry about missing out on anything if you use only one of them.

Can Mitragyna be powdered at home?

Absolutely yes, Mitragyna speciosa can be powered by crushing and grinding the Kratom leaves. On the contrary, it is a little challenging to prepare Kratom extracts at home. You can make it by boiling Kratom leaves in the water. However, our Mitragyna fans have always preferred to buy Kratom liquid extracts from the market as the packaged extracts have more standard potency and consistency, let alone the fact that it is easier to buy it from the market than making at home.

Should you change the dose when moving from one form to the other?

Yes, definitely. A huge quantitative difference exists between the two forms. Approximately 0.33 grams of 15x Kratom extract can produce the same effects as 5 grams of Kratom powder. If you are a beginner, then we would advise you to use no more than 2 grams of powdered Kratom.

Is there any price difference between the two forms?

The cost of Mitragyna speciosa differs widely from vendor to vendor. We highly recommend buying Mitragyna from genuine vendors online, especially those who offer correct information on their website and have a return policy. You will find substantial price differences between the two forms of Mitragyna speciosa.

However, bear in mind that a small fraction of liquid Kratom extract can produce the same effects when compared to Kratom powder. The price for Kratom liquid extracts ranges from $12.99 and may go up to even $49.99. On average, you can get it for around $20 to $30.

Overtime, Mitragyna speciosa fans have mastered the way in which they can consume Mitragyna to the extent that Kratom honey balls and Kratom peanut butter balls are also a popular method of taking powdered extracts. However, convenience and consistency make the liquid extract more attractive. At the end of the day, it depends upon your personal choice.

If you want to experience the gradual increase in the strength of the effects, then go for Kratom powder. Similarly, if you like to feel the intense effects quickly, then go for liquid extracts. No matter what you choose, we guarantee you that you will love this miracle herb, and its incredible healing ability will make you part of the huge Kratom community around the world.