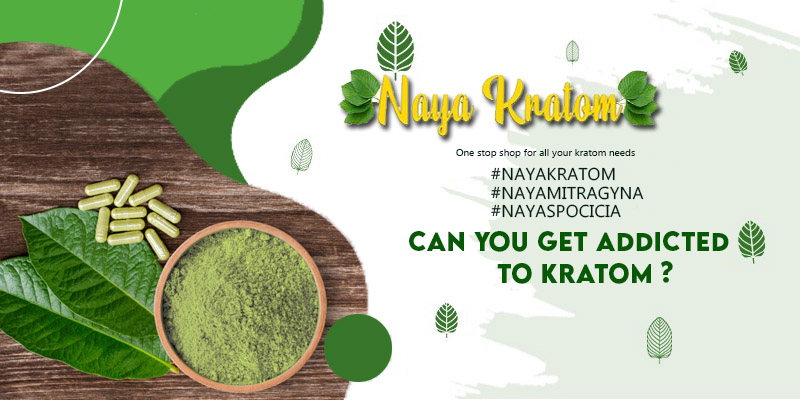 Kratom, Mitragyna Speciosa, with its growing popularity, is becoming controversial too, day by day primarily related to addiction and abuse. The Majority of Users of kratom don’t develop an addiction or adverse effects as it is a mild stimulant substance. With more and more people trying Kratom for various mental and physical impact and no detailed research and a lot of myths circulating with no scientific basis have made Kratom come to the spotlight and not in the right way.

Kratom is a herbal extract or powder; mitragyna Speciosa is the plant belonging to the coffee family grown in the Southeast Asian countries like Malaysia, Indonesia, Maeng Da, Bali, and another rain forest bearing Regions.

The natives had used kratom for ages to cure and treat many medicinal and non-medical illnesses and aches as a herbal alternative. With growing popularity, people all around the world have started taking kratom powder for their needs.

What makes Kratom have an addiction liability?

Kratom has a high alkaloid content in its chemical composition; the alkaloids include Mitragynine and 7-Hydroxymitragynine and up to or more than 40 other alkaloids. This high potency chemicals in high concentrations make Kratom a psychoactive substance that directly acts on the brain receptors.

Kratom produces effects in striking resemblance to some addictive drugs. This resemblance makes Kratom to be taken as an addiction liability.

The United States Food and Drug Administration has been working and researching on Kratom now. However, the FDA has not declared Kratom as a safe herb to be used for any medical or non-medical illness or treatment.

In 2014, the FDA made Kratom a controlled drug and banned its sale as a health supplement. To date, there is no concrete evidence for Kratom to be declared safe, and on the contrary, not enough study to ban it; people continue to use it, but the FDA hasn’t approved Kratom yet.

Difference between Kratom addiction and abuse

Addiction and abuse are often taken under one heading, but that is not true. Addiction means dependence on the substance to maintain the normal well being of the person. In contrast, abuse means taking the Drug or substance in a higher quantity than the body’s requirement that leads to adverse effects and may lead to a medical emergency.

Kratom addiction is very rare. However, abuse has a higher possibility as it is often taken in larger quantities or in combination with other substances due to lake of information and research on Kratom.

The bans by the FDA and The DEA has made it almost impossible for researchers to study and experiment with Kratom.

Can you get addicted?

We all know that excess of anything is harmful. Even drinking tea or coffee every day makes you used to it.

You can also get used to Kratom usage and can have some mild withdrawal effects.

However, Kratom is easy to buy in large quantities, so these patients opt for this herbal remedy that helps them with calming and relaxing the nerves as well as soothes the discomfort. This makes Kratom a substance that can be abused.

What can be the side effects of Kratom abuse?

Taking any psychoactive substance more than the recommended doses can lead to drug abuse and may produce side effects. As Kratum acts by activating and stimulating the brain receptors, the symptoms are mostly psychotic, but this entirely depends on the amount of Kratom used and is usually used in combination with another drug or substance.

Effects of abuse related to dosage

It is always recommended to use Kratom in low doses and not frequently to avoid adverse withdrawal effects. If you feel the slightest of these signs, always visit your nearest hospital and stop the usage of Kratom.

Long term usage of High doses of Kratom by people in discomfort and illnesses leads to tolerance development that makes them consume even higher amounts of Kratom that, in the end, leads to addiction and makes it hard for the person to leave it. Many people use it to get rid of their other addiction and end up getting used to Kratom.

The short term effects are usually alarming signs that indicate that you should limit the use of Kratom as it can develop into addiction and long term withdrawal effects if not controlled. These include:

When the Kratom user keeps on taking High doses of Kratom due to tolerance development, it can lead to an addiction that, on stopping than causes severe withdrawal symptoms. These include:

This is only seen when abused for years in very high quantities; Otherwise, addiction and side effects are relatively rare.

As said by Swogger, Kratom addiction and withdrawal syndrome are only seen rarely in people who take more than 5 grams and more than 20 times a week.

The good in Kratom

Although DEA and The FDA have reported Kratom abuse and fatalities, there is no substantial evidence to back up their claims to make Kratom a level 1 controlled substance.

Many physicians and researchers in their daily life experience have noticed that Kratom is helping people with their daily routine very mildly; people who have been in nervousness for years and relied on highly addictive drugs were getting relief by moderate use of Kratom.

Opioids and other drug addicts like heroin can mask the withdrawal symptoms by Kratom usage. Many physicians have vouched for Kratoms exceptional capabilities in medical use.

Some physicians and researchers believe that Kratom should be legalized as a health supplement in the record of its exceptional healing and remedial powers.

The FDA and DEA have reported that there have been 44 deaths that are associated with Kratom abuse, but that’s not entirely true. All of the deceased persons had some sort of underlying medical condition like epilepsy, CVD. In all of the cases, kratom was used in combination with alcohol.

The FDA and Big Pharma are working together to demolish the American Kratom Association and Kratom Industry as it is a significant threat to the pharmaceutical and drug industry. As Kratom provides a herbal alternative to a highly addictive and dangerous pharmaceutical drug Big Pharma wants to demonize Kratom by spreading false news and myths and prevent research.

So, Kratom is not as dangerous as DEA has reported, and Kratom advocates always deny all claims by proof and logic, making Kratom still available.

Another myth is related to the Brain receptors Kratom acts on. Although it activates the same receptors as some analgesics and psychotic, addictive drugs, it doesn’t mean that it belongs to that family. Kratom has an utterly different mechanism of action and is much milder than prescription drugs.

The dosage that keeps you safe

Better take care than be sorry after. It is always recommended to take everything you use, not only kratom, in a safe limit to avoid any side effects. Excess if everything is terrible, and when it comes to psychoactive substances, you can never be careless.

Here is some dosage to help you prevent kratom abuse.

It is recommended taking 5 grams up to three times a day; this is the ideal dosage without adverse effects and addiction liability.

Much of the negative cases that are reported due to Kratom are due to an infection spread by Kratom usage, or low quality contaminated Kratom.

Kratom sure is a wonder herb, but only when you get the purest lab-tested product for consumption.

Prefer buying it online rather than a local drug or vitamin shop. When purchasing online, always look if the Vendor is GMP AKA certified and their lab testing and quality reassurance methods. Feel free to contact them about your concerns and queries.

Some of the quality Kratom vendors are:

You can also check review articles and Reddit reviews from actual users.

Kratom consumers on different forums have discussed addiction and withdrawal symptoms. However, most of the users have experienced mild or no signs, and those who have adverse effects were chronic users and high dose consumers.

There are no rehabilitation centers or specific treatment or antidote therapy for Kratom addiction, as it is not that severe. The treatment is mainly through counseling and behavioral therapy.

The following are the most common rehabilitation methods used worldwide:

Kratom is undoubtedly not negative effect free and comes with its fair share of side effects, but you can indeed prevent this if you stay careful and don’t overuse the herb. It is not FDA approved for any medical use or as a prescription drug.