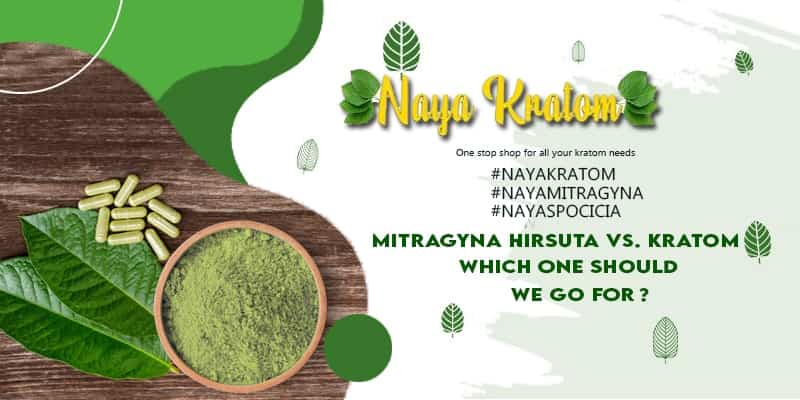 For a long time, there has been an ongoing debate between consumers of Mitragyna Hirsuta and Mitragyna Speciosa (Kratom) about which one is more efficient than the other. At the same time, there is a whole group considering these two as one. So If you’re a beginner looking for the right herb to start with, confused between these two Mitragyna species, or curious to find out which one is more suitable, then my friend, you’re at the right place!

Mitragyna Speciosa and Mitragyna Hirsuta are psychoactive plants belonging to the family of trees known as Rubiaceae. They are native to countries like Thailand, Vietnam, and Indonesia. They have been used by people over there for medicinal purposes for ages. However, in today’s world, the enthusiasts of these herbs can be found anywhere.

How is Mitragyna Hirsuta Similar to Kratom?

Before digging into the vast differences, let’s first discuss why they are sometimes taken as one.

Mitragyna Hirsuta is also called Kratom’s sister due to its similarities. Both belonging to the same species are almost similar-looking, flowers producing plants. The flowers are sessile arranged in globular heads. Both have leaves mainly used to treat cough, elevate mood, and provide strength to the body.

Mitrgayna Speciosa and Hirsuta are available widely all over the internet. They are being sold in various forms like capsules and powder, mainly taken with tea or alcohol. The resultant beverage is usually bitter, and enthusiasts prefer to add a sweetener along with it.

Lastly, both work through identical actions in the body by acting on the same Mu -receptors (MORs) in the brain. As a result, they often give similar effects on the body.

The Physical Appearances of Mitragyna Hirsuta and Mitragyna Speciosa

Mitragyna Speciosa is popular with the names “Kratom” in Thailand, “biak biak” and “ketum” in Malaysia. It is an evergreen tree that can grow 10-30 meters tall and 2 to 3 feet in diameter. The trunk is straight, and twigs angulate. It is mainly found in open savannahs or swamp forests and is described as the most flood-tolerant species. Its leaves are the major reason why these plants are always in the limelight. The leaves of Kratom are 14 to 20 cm long with 17 pairs of veins. These veins can either be green or red; Kratom with red veins are more bitter and have a longer duration of medicinal effects than the green ones.

On the other hand, Mitragyna Hirsuta, also known as “kra thum Kok” is a deciduous tree growing 10-20 meters tall and 20 cm in diameter. Their leaves have almost similar structures with light greenish-white veins but are smaller in size than Kratom leaves.

So if you ever get a chance to travel to South Asia and find these trees or buy a plant for home, now you would know how to tell the difference between these two.

The Alkaloids of Mitragyna Hirsuta and Kratom and their Mechanism

The overall mechanism of these two plants is quite similar; they both, when ingested, enter into the bloodstream and go to the brain, where it acts on mu receptors and stimulates it. When stimulated, certain chemicals are released from the brain, which gives desired effects to the consumers. However, the difference between these two herbs lies in the alkaloids they are made up of.

The Kratom or Mitragyna Speciosa is made up of the following Alkaloids:

Out of this list, the first two are the predominant ones and show the most affinity for the receptors in the brain. Studies have shown that 7 HydroxyMitragynine has 46 times greater potency towards these receptors than Mitragynine.

In contrast, in Mitragyna Hirsuta plants, no traces of Mitragynine have been found. Instead, it is made up of the following alkaloids:

A very little detail is known about the mechanism of each alkaloid in Mitragyna Hirsuta; however, it is noted that Mitraphylline is a less potent substance receptor agonist than the Mitragynine present in Kratom.

Even though the mechanism of these two herbs varies significantly, the effects produced by consuming them are quite alike. These can produce a mildly euphoric state, giving a nice warm feeling to the consumers, making them alert and energetic. It also has soothing effects such as enhancing sleep and providing calmness to the body. These herbs are also consumed to boost stamina and cognitive functions, hence used by farmers and labor workers.

How to Consume Mitragyna Speciosa and Hirsuta?

If you go looking out for these herbs online, you will probably have a hard time deciding where to begin as it is available in various forms. Both Mitragyna Speciosa and Mitragyna Hirsuta are easily available in capsules, powders, tinctures, and extracts. The leaves can also be chewed directly, or the powder can be smoked. However, Kratom and Hirsuta tea is the most well-known method of consumption.

Kratom and Mitragyna Hirsuta tea are formed by adding leaves directly or crushing them into a fine powder and adding them into the water for 30 minutes. Once the water is boiled and all-cooked, it should be drunk within 30 minutes slowly for the maximum effects. The studies have shown that the Kratom and Mitragyna Hirsuta tea also have pain-relieving effects. Those who want to have maximum sedative effects should consume it in the form of tea.

Can Mitragyna Hirsuta be the Alternative to Kratom?

As mentioned above, Mitragyna Hirsuta produces milder effects on the body when compared to Kratom. This is due to their less potency in stimulating the substance receptors. The kratom, on the other hand, when taken in large amounts, can produce substance-like effects on the body. This results in developing a dependency on Kratom and causes withdrawal effects. The withdrawal effects include runny nose, mood swings, joint bone pain, muscle ache, etc. A study was also done on mice that showed when after five days of injecting Mitragynine, when the antagonist was added, the mice showed symptoms of withdrawal such as urination and jumping, etc.

In contrast, Mitragyna Hirsuta is known for its safer properties and for no abuse potential. Moreover, it can be used to eliminate the habituation caused by Kratom in many consumers and hence being used by them as an alternative to Kratom.

This is the point usually made by the Mitragyna Hirsuta fanatics to win a debate against Kratom lovers. The Mitragyna Hirsuta is legally allowed to be consumed, manufactured, sold, and brought in every part of the world. The main reason is that it consists of less potent alkaloids that do not have many toxic effects on the body and have no potential to do “more harm than good.”

On the contrary, due to Kratom toxicity and potential for abuse, it’s no longer legally supplied or manufactured in Australia, few countries of  Europe, and few states of the USA. If the citizen broke the law, they would be charged a fine or sentenced to jail. In the USA, the DEA placed this drug under the list of controlled substances. In a few states of the USA, such as Alabama and Rhode Island, it is illegal to grow, trade, or consume Kratom.

Although Mitragyna Hisuta is not legally banned, it must be used with caution as there is a possibility that it is legal because of the lack of research and reports on it. It is also important to know that both herbs are not approved by the FDA for human consumption.

Is Mitragyna Hirsuta as popular as Kratom?

In simpler words, No. But sooner it will be. Kratom consumers are larger in quantity when compared to Mitragyna Hirsuta. But, due to Kratom’s legality problems and different regulations regarding its consumption in different parts of the world, more people are leaning towards using Mitragyna Hirsuta. As a result, Mitragyna Hirsuta has become a topic of interest for many of us.

Mitragyna Hirsuta and Kratom are closely related to each other. Still, different alkaloids in both of them have led to the Kratom being more powerful than Mitragyna Hirsuta. But the worldwide legality of Mitragyna Hirsuta is why it has become widely popular among the newer generation. There are still studies being conducted for these two herbs, and it must be known that there is not enough evidence to prove these studies; hence they must be used carefully.