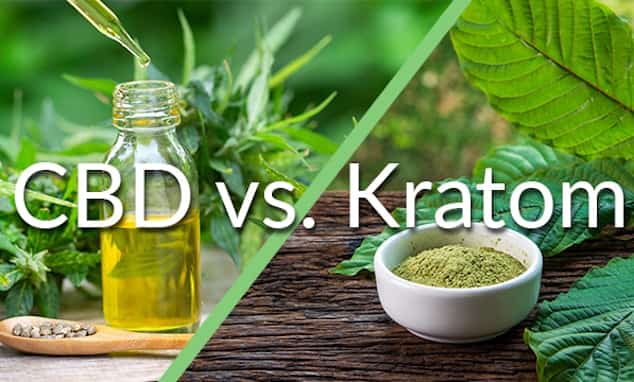 These days, everyone is on something like a “fix” to find relief for many conditions, from home remedies to over-the-counter treatments. In recent years, the health and fitness industry has gained massive popularity due to a radical interest of consumers towards natural herbal supplementation, especially CBD and Kratom.

Both CBD and Kratom have piqued many across the western world for the unique therapeutic benefits offered; for recreational and medical purposes. The discovery of CBD sparked curiosity for many across the globe to unearth whatever other plants provide similar benefits. Thus, the results led to the discovery of Kratom!

There is a sparked debate across the globe regarding CBD vs. Kratom. Regardless of whether you’re a newbie or a CBD/Kratom Guru and are wondering which one is better or rather the perfect fit to elevate your lifestyle, then you’re right where you should be. While under the umbrella of organic supplements, both are still being investigated for the benefits they offer. This CBD article will extensively compare and contrast CBD and Kratom and help you make the right decision by the end of it.

WHAT IS CBD, AND HOW DOES IT WORK?

CBD, scientifically known as cannabidiol, is one of the two main cannabinoids (chemical compounds) extracted from the Cannabis sativa plant. It is an organic herbal supplement used in various products, including gummies, teas, lotions, vapes, tinctures, etc. Unlike its cousin THC, it is not psychoactive, i.e., won’t get you high, and offers many therapeutic benefits. Thus, the Farm Bill has legalized CBD across many states of the US.

There are various CBD extraction methods, e.g., CO2 extraction via different solvents like butane or ethanol. Since it is derived from the whole plant, it can have other cannabinoids like THC and terpenes compounds. Such CBD products come under the category of Full-Spectrum CBD. Similarly, if you’re interested in products having pure CBD content, i.e., no other cannabinoids or terpenes, then you can opt for CBD Isolate products as well. You can also find refined Full-Spectrum CBD products, i.e., with selective cannabinoids and zero THC content, called broad-spectrum CBD products in the market.

The human body, particularly the Central Nervous System (CNS), is composed of a vital physiological system called the Endocannabinoid System (ECS), consisting of numerous cannabinoid receptors. CBD indirectly influences the ECS; it inhibits the breakdown of a neurotransmitter called anandamide. An increase in anandamide levels causes a feeling of joy in the body, similar to the effects of THC. CBD is also known to bind with TRVP-1 receptors, which are responsible for various homeostatic functions like regulating body temperature, and inflammation.

Every cell has CBD receptors; thus, CBD has a massive range of uses, from treating discomfort to relieving uneasiness.

WHAT IS KRATOM, AND HOW DOES IT WORK?

Like Cannabis, Kratom, scientifically known as Mitragyna speciosa, is a plant of the coffee family, native to regions of southeast Asia. Kratom is a versatile herb that offers myriad therapeutic and recreational benefits. Unlike CBD, Kratom is addictive as it provides psychoactive effects due to morphine. Kratom is composed of two active alkaloids: mitragynine and 7-HMG (7-hydroxymitragynine), similar to those found in the opium poppy: morphine, codeine, and thebaine. These alkaloids interact with the body’s receptors and produce effects of sedation, amusement, and discomfort relief. Like coffee, it too acts as a stimulant when consumed at lower doses; this makes it a unique energy booster. However, it has psychoactive properties similar to substances when consumed at higher doses.

Kratom leaves are dried and crushed to powder and converted into paste, capsules, pills, etc., for several uses. When classifying strains, Kratom is divided into three types: red vein, green vein, and white vein. Out of all three, red is the most potent, white vein offers energetic effects, and green is an intermediate offering benefit of both.

As per history, it has been used as an alternative to breadseed; however, it’s not a poppy due to delivering milder effects than the standard Papaver somniferum. Despite its utilization for thousands of years as similar to Cannabis, it never gained much popularity as Cannabis did. Until recently, its usage gained immense recognition across the US and Europe.

Let’s compare and contrast your daily CBD and Kratom and help you clear all confusion.

CBD is undoubtedly breaking waves for numerous medicinal benefits it offers. However, there’s less scientific evidence regarding the benefits provided by Kratom. Though that doesn’t mean it’s ineffective.

CBD and Kratom vary significantly at a molecular level; while they offer similar effects, let’s look at both closely.

ARE CBD AND KRATOM LEGAL?

As per the 2018 Farm Bill, Hemp has been legalized in the US; however, CBD still stands in a grey zone. All CBD products having less than 0.3% of THC content are legal. However, this varies as per state jurisdictions. To be on the safe side, always check your home state laws regarding CBD.

When it comes to Kratom, its legality is under threat and varies from state to state due to its addictiveness. In 2016, the US Drug Enforcement Agency (DEA) made an attempt to ban Kratom from the US; however, in 2017, the Food and Drug Administration (FDA) recommended it to be classified as a Schedule I drug alongside other opioid narcotics. Following public objections, and approval of both the DEA and FDA Kratom is still legal at the federal level.

[Note: The FDA does not regulate CBD nor Kratom.]

SO, CBD OR KRATOM?

Alright, just because something is herbal doesn’t mean it would suit your lifestyle and, above all, safe to use!

When it comes down to picking the best option, this is undoubtedly a bewildering question. While many might agree with Kratom, CBD is undoubtedly a clear winner over it when bearing the risks, benefits, legalization, and side effects! While Kratom is a preferred herb of choice for numerous reasons; however, there is a considerable lack of scientific evidence to back its claims. Kratom possesses addictiveness and isn’t advised by physicians for treating medical conditions.

Please bear in mind, everyone has a unique chemical makeup, and what suits one might not suit another. While CBD might be miraculous to one, Kratom might do wonders to another. With all that being said, we’d strongly advise you to consult a doctor and do thorough research to understand your condition before choosing either option.