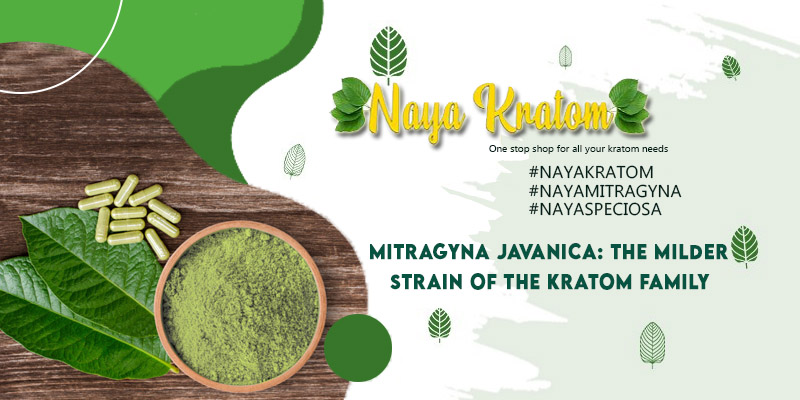 You may have heard about the miraculous natural occurrence known as kratom — the wonder plant that has helped thousands with several addiction problems and has become a recurring demand for millions worldwide! But to most enthusiasts, the herb Mitragyna Javanica remains an unknown entity that they haven’t yet had the fortune of trying.

If you’re a kratom enthusiast, chances are you’d fall in love with its cousin Mitragyna Javanica, better known as Kra Thum Na or Kra Thum Ta tree, as well! But before you dive headfirst into trying a herb you never have before, it’s essential that you first carry out proper research regarding the plant.

This article essentially serves as your ultimate guide to finding out everything you’d ever wanted to know about the rarely mentioned member of the Mitragyna family- the Javanica plant!

What Is Mitragyna Javanica?

Mitragyna Javanica is a herb that comes from the tree of Kra Thum Ta. Like Kratom, this plant is also native to Southeast Asia. The Kra Thum Ta tree is related to the trees that grow coffee on them.

These plants are widely found in the tropical and subtropical regions of 2 continents mainly, Asia and Africa. They grow in a rainforest-like environment and thus thrive the best in these Southeast Asian regions. The trees of this herb grow very tall and grow broad leaves on them. These leaves are an essential part since all of the products are derived from them.

The reason why this strain is a lesser-known one in the market is because of its family member, Mitragyna Speciosa, also known as Kratom, which has gained much more popularity. At a slow but sturdy rate, a lot of people are searching for alternate options for the Kratom herb. This is mainly because of the unavailability of the plant or legal issues behind this herb all over the world.

This article will provide a piece of in-depth information about the Kra Thum Ta tree. Thus, it will help you choose if this strain will work for you as a substitute for the Kratom plant.

Botanical Nomenclature Of The Plant

Like animals, plants also have close species grouped as members of a family. To name the members of a particular family, scientists use a method called botanical nomenclature.

Following is the botanical nomenclature of the Kra Thum Ta tree:

Rubiaceae is the family of flowering plants of the kingdom Plantae. This family is often known as coffee, madder, or the bedstraw family. The largest diversity of its species is found in the subtropical and tropical regions.

History And Cultural Use Of The Plant

This plant has been used by Southeast Asian people for over 200 years. For years and years, these Mitragyna species plants are being used by the regional people there as traditional medicine. They use it for a lot of herbal remedies. The plant is aboriginal to the lands of Thailand, Indonesia, Malaysia, and other countries of this region.

There has been little medical research on any member of the Rubiaceae family; hence the cultural use of these plants is merely based on the experiences of tribal people. These plants gained popularity in the global markets when Kratom came on the surface.

Is It Similar To The Kratom Plant?

Mitragyna Speciosa and Mitragyna Javanica both belong to the same genus and same family but are 2 different species of the Rubiaceae family. They both are native to the Southeast Asian regions and grow into very tall trees there.

Appearance-wise, both of the trees have a similar look, but when studied about the chemical composition, there are many differences between them, which will be discussed shortly in detail.

Here are a few points to sum up how similar these two plants are:

What Are The Discrepancies Between The Two Plants?

The Leaves Of The Two Plants

As discussed earlier, the leaves of the 2 plants have a similar appearance, but they differ in their chemical composition completely. The table below summarizes these differences.

Both of these strains have a lot of discrepancies when it comes to their function and therapeutic range. Due to these differences in the leaves’ chemical composition, the action levels and dosage vary greatly. Since Javanica is a milder strain than Kratom, you will need to consume higher dosages for its function to kick in.

When the leaves of the plant are crushed to form the powder, you will see that both the plants have the same powdered appearance. The real difference exists between the activity levels of the powdered products.

Both the products are under the research category, but there is much less research done on the Mitrajavine alkaloid as compared to Mitragynine. This is because people rarely know about the existence of this other species.

Products Made With Javanica

Like Kratom, there are a lot of products made from the leaves of the Kra Thum Ta leaves as well. These products include:

Where Can You Find Quality Javanica At Affordable Prices?

The products of the KraThum Ta tree can be easily purchased from a vendor selling them online. Multiple websites will deliver these products to your doorstep. To help you find the websites that sell products that are of optimal quality and do not compromise on the freshness, here is a list of the top 5 vendors.

The Legal Status Of The Herb

There has been very little research on the Kra Thum Ta tree and its products. Because of this lack of research, many people simply have no idea that this product or Kratom alternative even exists. Thus, unlike Kratom, this herb is not banned everywhere in the world.

For many people, even the origins of this herb are unknown. Kratom has gained popularity in the world, but its substitutes and alternatives are much lesser-known.

Have There Been Any Reported Incidents With This Plant?

There have been very few incidents reported on the use of this plant. If you do not hear much about a strain, there is probably a reason behind it. The particular reason for this circumstance is that it is harder to grow or less productive than the others.

Another reason that there are fewer incidents reported is that most people are avid Kratom users. And only those who can not find Kratom or live in a state where Kratom is banned search for other options like Javanica.

There are many reviews posted online by users who have consumed this herb. Here is a summary of a few of them:

Impact Of Dosage On Its Effects

To get effects the same as the Kratom strain would give, you need to increase the dosage of the Kra Thum Na herb. The users of this strain claim that this herb has the same properties as the Speciosa plant, but the effects are very mild.

This is why the users have to increase the dosage for the therapeutic effects to kick in. Since this product is still under the research category, there are no proper claims or enough shreds of evidence that support its medicinal use.

There exists a potential risk of abuse of these Mitragyna species, which is why the FDA has banned the use of the Speciosa species in many states in the U.S. The Javanica species are rare and have different alkaloids, so they have a much more clement effect.

Does The Herb Decrease In Potency?

This strain is not as powerful as the Speciosa one. The reason behind this is mainly the difference in their chemical composition.

Due to its clement effects, the properties of its therapeutic use are much less dramatic. This gives an upper hand to those who are looking for a subtle substitute for the Kratom plant.

Many users shift to this strain mainly because this is available everywhere, is not banned in every other state, and helps decrease tolerance to the Speciosa species.

Is It A Kratom Substitute?

Now, to sum all this discussion up, there can be 2 possible pathways to choose which product is right for you. Here’s how you can decide:

To sum up, everything that has been stated so far, decide which option is better suited for your ideal purpose.